Lake Gleneida is a reservoir in the hamlet of Carmel within the Town of Carmel in central Putnam County, New York. Originally a smaller natural water body, Shaw's Pond, it was dammed by New York City in 1870 and enlarged to 168 acres (68 ha) for inclusion in its water supply system. It is classified as a controlled lake by the City system, and is part of its Croton Watershed.

The roughly heart-shaped lake is immediately to the southwest of downtown Carmel. It is surrounded by grassy parkland sloping down to the lake from the roads on the south and east, and woods on the other sides. NY 301 follows the north shore, ascending to its eastern terminus at NY 52 across from the Putnam County courthouse. Route 52 follows the eastern shore for a short distance to the south of this intersection before it, too, ends at US 6, which continues around the southern shore. There is no road along the western side, although a local street, Glenvue Drive, traverses the top of the 545-foot (166 m)-high ridge there.

There are no inlet brooks. A dam and spillway are located on its northwest end, with outflow draining into the New York City water supply system's West Branch Reservoir, where it joins with waters from the Delaware Aqueduct. Water in excess of New York City's needs there goes over its spillway and into the West Branch Croton River, which is captured downstream by the Croton Falls Reservoir. 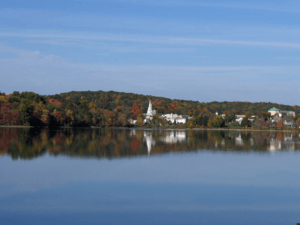 The lake was originally known as Shaw's Pond, after an early landowner. It had been a part of the Carmel landscape since the hamlet's designation as county seat upon Putnam's 1814 creation. It quickly became a popular spot for boating and fishing.

The name started appearing on maps around 1840. Not long after, residents became dissatisfied with the name and proposed grander names for it. In 1852, a committee of local residents finally settled on Lake Gleneida. New York City bought rights to the lake around 1895 and tore down what houses were built near it.

The New York City Department of Environmental Protection (DEP) owns Lake Gleneida, considered one of three controlled lakes in the city's water system. That means it may withdraw water as a right of ownership. 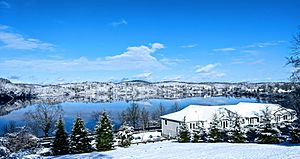 Recreational use of the lake falls under DEP regulations. Fishing, ice fishing and boating are allowed with a valid DEP permit and New York State Department of Environmental Conservation-issued fishing license. Swimming is not permitted.

Boats used in the lake may not be used in any other body of water, to prevent the spread of zebra mussels. This raised some local concern in 2005, since many were left on shore during the offseason and the town found them unsightly as it prepared to spend $2.3 million to spruce up the hamlet. DEP was able to get most of the owners to relocate them to storage areas out of sight of downtown.

All content from Kiddle encyclopedia articles (including the article images and facts) can be freely used under Attribution-ShareAlike license, unless stated otherwise. Cite this article:
Lake Gleneida Facts for Kids. Kiddle Encyclopedia.