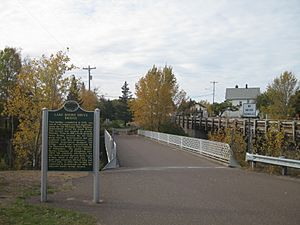 Looking along the length of the bridge

Originally located on the site was a Pratt through truss bridge, which by 1915 had deteriorated sufficiently to warrant replacement. The new bridge was designed by the Michigan State Highway Department under a system of standardized bridge plans provided to local communities on request. The Lake Shore Drive Bridge was constructed by the Wisconsin Bridge and Iron Company of Milwaukee, and was completed in 1915. The concrete abutments were made by the Smith-Byers-Sparks Company from Houghton, Michigan. The Lake Shore Drive Bridge was one of two bridges built simultaneously over the Eagle River, the other located in Phoenix, Michigan.

The bridge is a contributing property of the Eagle River Historic District, listed on the National Register of Historic Places on September 13, 1984.

The collapse of the I-35W Mississippi River bridge, a continuous deck truss, in Minneapolis on August 1, 2007, prompted inspections of bridges of similar construction. Four bridges of this type were identified in Michigan, including the Lake Shore Drive Bridge. The bridge was inspected on August 6, 2007, and was determined to be safe. 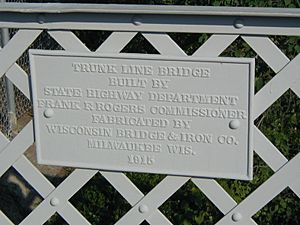 Commemorative placard on the guard rail

The bridge is a Warren deck truss and continuous deck truss made of riveted steel. The 139-foot (42 m) bridge has three spans: a main span of 105 feet (32 m) flanked by two 34-foot (10 m) spans. The guard rails are made of woven steel lattice.

All content from Kiddle encyclopedia articles (including the article images and facts) can be freely used under Attribution-ShareAlike license, unless stated otherwise. Cite this article:
Lake Shore Drive Bridge (Michigan) Facts for Kids. Kiddle Encyclopedia.