Lake St. Martin is a lake in the Canadian province of Manitoba located in the Interlake Region between Lake Manitoba and Lake Winnipeg.

Settlements on the lake, including the Lake St. Martin First Nation, were flooded and made uninhabitable after the 2011 Assiniboine River flood. 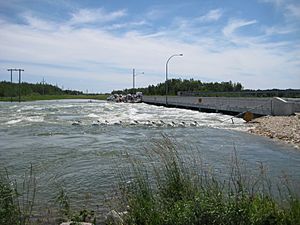 All content from Kiddle encyclopedia articles (including the article images and facts) can be freely used under Attribution-ShareAlike license, unless stated otherwise. Cite this article:
Lake St. Martin Facts for Kids. Kiddle Encyclopedia.