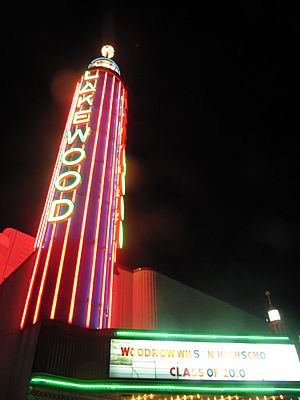 The Lakewood Theater opened in 1938 with "Love Finds Andy Hardy"

Lakewood is a neighborhood in East Dallas, Texas (USA). It is adjacent to White Rock Lake and Northeast of Downtown Dallas. Lakewood is directly east of the West Village and Highland Park neighborhoods in Dallas. Skillman St. and Abrams Rd run South to North through Lakewood. 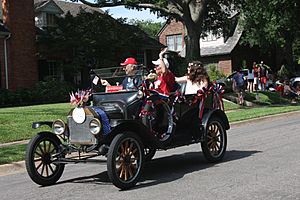 A parade float in the Lakewood 4th of July Parade.

Lakewood has the historic Lakewood Theater, which used to show classic films and host contemporary musical and comedy events. It is currently closed awaiting a firm plan for future use; the building remains a presence. The Lakewood shopping area is an entire neighborhood of diverse restaurants and shopping venues. Nearby the popular Dallas Arboretum and Botanical Gardens has an extensive children's adventure garden housed within its 66 acres. Both overlook the beautiful White Rock Lake.

One of the year's highlights is the charming Lakewood Fourth of July Parade and Celebration. It reflects the small-time feel in the middle of the city that Lakewood is so well known for. The 2016 theme is Lakewood Dreams Big: in Red, White and Blue.

Lakewood is also home to Lakewood Country Club. Built in 1912, Lakewood Country Club’s three-story clubhouse overlooked a woodland that rolled and tumbled pleasantly over this fast growing East Dallas neighborhood. The Club’s founding fathers knew that the land at the corner of Gaston and Abrams would be a perfect spot for Dallas’ second 18-hole golf course. 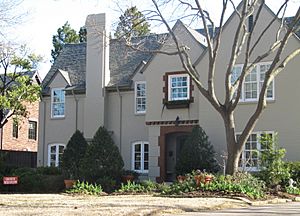 Lakewood Boulevard includes many 1920s and 1930s mansions and estates. Most are in the Tudor styles by Dines and Kraft or Mediterranean-Hollywood styles by Clifford Hutsell. This is the former home of the "Mayor of Lakewood" Jim Young and "First Lady" Barbara Young.

Lakewood proper is surrounded by a collection of other historically significant neighborhoods, generally developed from the early 20th century to the 1950s, including Lakewood Heights, Junius Heights Historic District (Bungalow Heaven), Parks Estates, North Stonewall Terrace, Caruth Terrace, Wilshire Heights, Mockingbird Heights, Mockingbird Meadows, The Gated Cloisters, Hillside, Lakewood Hills (formerly Gastonwood-Coronado Hills), Hollywood Heights, and Belmont; among others. Commonly, people outside these neighborhoods group them together under the heading of Lakewood, The M-Streets, or Old East Dallas - which are overlapping regions in the near-eastern part of the city. Historic Swiss Avenue (Mansion Row) anchors the area towards Downtown.

Currently, there are a large number of Historic and Conservation Districts reflecting prodigious numbers of Craftsman, Prairie-Four Squares, Tudors, Spanish and Mediterranean Eclectic and Early Ranch homes, many of native Austin stone. The homes range from two-bedroom bungalows to massive estates on acreage. There are also duplexes, four-plexes and very small apartment complexes.

Some of the older, smaller homes are being torn down in favor of much larger, more expensive homes as this lovely enclave in the heart of the city grows in popularity.

The Shakespeare Festival of Dallas debuted in 1972 in the Bandshell at Fair Park before moving to its current home at Samuell Grand Amphitheatre — appropriately in Samuell Grand Park — in 1989. 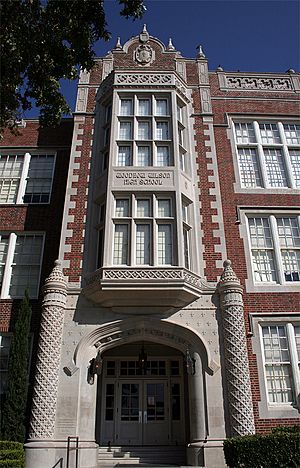 The Dallas Independent School District serves the Lakewood area. The area is within Trustee District 2D In 2008 Jack Lowe represented the district, and it is now represented by Dustin Marshall.

In 2012 Eric Nicholson of the Dallas Observer stated that Lakewood Elementary had "superb" academics, citing its regular appearance as an exemplary-ranked school by the Texas Education Agency and how its test scores were far superior to DISD and state averages. In 2014 the school had 853 students with 17% classified as being low income; 76% were non-Hispanic white. As of 2016[update], 96% of the student body was not low-income, making it the only DISD school with 80% or more non-low income students, and it was also the school with the highest percentage of Anglo White students in the school district. In 2015 Nicholson wrote that Lakewood elementary parents are perennially opposed to changing the school's attendance zone and that they "are fiercely protective of their successful but carefully gerrymandered neighborhood" institution. In 2014 other DISD board members opposed a proposal from fellow board member Bernadette Nuttall to rezone some houses zoned to Lakewood to Mata and Mount Auburn schools. Due to overcrowding, by 2014 the Lakewood Elementary Expansion Fund (LEEF) generated $500,000 to fund an architectural plan for an expansion, and DISD proposed a "Bridge Plan" to allow for the expansion of the school. In 2013 parents began a campaign to raise $15 million for expanding Lakewood, wanting to replace its older facility and the portable buildings that housed over half of Lakewood Elementary's students.

Woodrow Wilson High School is the first in Dallas to begin offering Pre-International Baccalaureate Diploma Programme classes for 2010-11 Freshmen. It was one of four IB candidate schools in Texas. After a successful site visit by International Baccalaureate Organization in November 2010 the school was accredited as an official IB World School by the Geneva, Switzerland headquarters in March 2011. In 2014, it graduated its first IB Diploma class.

J. L. Long Middle School was certified as a candidate school for International Baccalaureate Middle Years Programme in May 2011. It was fully accredited in 2014, uses IB curriculum and teaches Mandarin Chinese, in addition to three other languages. Less than two dozen public middle schools in Texas are official IB schools.

Eduardo Mata Montessori School, a K-8 school, gives second admission priority to people zoned to Woodrow Wilson High. Therefore, Lakewood is one of the neighborhoods with priority for the school.

The Dallas Public Library Lakewood Branch is located at 6121 Worth Street, 75214. The library is in Junius Heights.

All content from Kiddle encyclopedia articles (including the article images and facts) can be freely used under Attribution-ShareAlike license, unless stated otherwise. Cite this article:
Lakewood, Dallas Facts for Kids. Kiddle Encyclopedia.