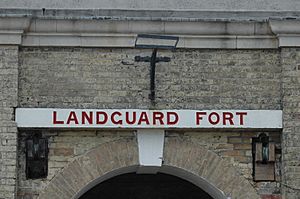 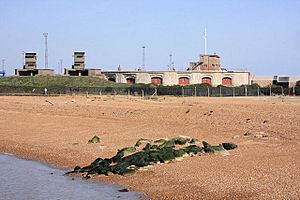 Landguard Fort is a fort at the mouth of the River Orwell outside Felixstowe, Suffolk, designed to guard the entrance to the port of Harwich. It is now open to the public.

Originally known as Langer Fort, the first fortifications from 1540 were a few earthworks and blockhouse, but it was James I of England who ordered the construction of a square fort with bulwarks at each corner. 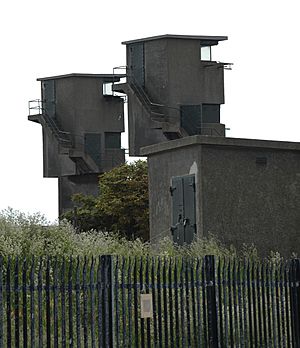 In 1667 the Dutch landed a force of 2000 men on Felixstowe beach in front of (what is now called) Under Cliff road east and advanced on to the fort, but were repulsed by Nathaniel Darrel and his garrison of 400 musketeers of the Duke of York & Albany's Maritime Regiment (the first English Marines) and 100 artillerymen with 54 cannon.

The fort was considered part of Essex in the 18th and 19th centuries; births and deaths within the garrison were recorded as 'Landguard Fort, Essex'.

A new Fort battery was built in 1717, and a complete new fort on an adjoining site was started in 1745 to a pentagonal bastioned trace. New batteries were built in the 1750s and 1780, but the biggest change was in the 1870s where the interior barracks were rebuilt to a keep-like design, the river frontage was rebuilt with a new casemated battery covered by a very unusual caponier with a quarter sphere bomb proof nose. Several open bastions were enclosed, and a mock ravelin block constructed to house a submarine mining contingent.

Two landscapes were commissioned, c.1755, from Thomas Gainsborough - then still little-known and living at Ipswich (1750-9) - for the Governor's Quarters at Landguard by his friend Philip Thicknesse, Lt. Governor of Landguard Fort. These were later destroyed by the damp conditions at the Fort, but an engraving of one of them survives.

In the Napoleonic Wars the strength and combat readiness of the Fort caused the Army repeated concern. In 1801 it was visited by General Lord Cornwallis, Eastern District commander-in-chief, and formerly vanquished at Yorktown in America but victorious in India. After 1804 steps were taken to extend and strengthen it, with the supply and ammunition stores moved across to Harwich for safety. The badly disciplined garrison drank the gin found on a captured smugglers' boat and four died--probably of alcohol poisoning.

During the Second World War, it was used as one of the balloon launch sites of Operation Outward. This was a project to attack Germany by means of free-flying hydrogen balloons that carried incendiary devices or trailing steel wires (intended to damage power lines.) Between 1942 and 1944, many thousands of balloons were launched.

However the main uses of the Fort and nearby structures were:

--HQ for the coast artillery guns defending Harwich Harbour. In 1944 radar was installed for their fire control. By 1941 4 6-inch and 2 twin-6-pdr guns were operational on the Landguard Peninsula, housed in concrete emplacements which remain;

--HQ and Plot Room for the heavy anti-aircraft defending the Harwich-Ipswich area, till this moved to Q Tower in Felixstowe town in 1941;

Observers on top of the Fort witnessed and plotted many air raids, German minelaying actions, shipwrecks and air crashes. In 1944, in a probable false alarm, the Landguard guns opened up on supposed German midget-sub raiders in the harbour entrance. Later that year Allied landing ships loaded at the former RAF piers just to the north.

The 10inch gun pit in Left Battery was converted into an Anti-aircraft Operations Room for Harwich in 1939. The Army left the Fort in 1957. The fort has been structurally consolidated and is open every day from April to the end of October. It is now in the guardianship of English Heritage.

All content from Kiddle encyclopedia articles (including the article images and facts) can be freely used under Attribution-ShareAlike license, unless stated otherwise. Cite this article:
Landguard Fort Facts for Kids. Kiddle Encyclopedia.