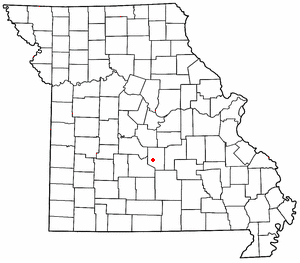 Laquey (pronounced "Lake-wāy") is an unincorporated community in Pulaski County, Missouri. It is about six miles southwest of Waynesville. It was founded in 1900 and named for the Laquey family.

A post office called Laquey has been in operation since 1899. The community has the name of the local Laquey family.

While the community is unincorporated, it is experiencing rapid growth due to its proximity to Fort Leonard Wood. The Laquey R-V School District had been for many years a K-8 district but in the early 1970s expanded to begin a high school. It's now the third-largest school district in Pulaski County, after Waynesville and Dixon.

Major north-south routes near Laquey include:

All content from Kiddle encyclopedia articles (including the article images and facts) can be freely used under Attribution-ShareAlike license, unless stated otherwise. Cite this article:
Laquey, Missouri Facts for Kids. Kiddle Encyclopedia.