Las Cumbres Observatory (LCO) is a network of astronomical observatories run by a non-profit private operating foundation directed by the technologist Wayne Rosing. Its offices are in Goleta, California. The telescopes are located at both northern and southern hemisphere sites distributed in longitude around the Earth. For some astronomical objects, the longitudinal spacing of telescopes allows continuous observations over 24 hours or longer. The operating network currently consists of two 2 meter telescopes, nine 1 meter telescopes, and seven 40 cm telescopes, placed at six astronomical observatories. The network operates as a single, integrated, observing facility, using a software scheduler that continuously optimizes the planned observing schedule of each individual telescope.

Rosing incorporated Las Cumbres Observatory in 1993 with the goal of aiding universities, observatories, and individuals in the acquisition and improvement of telescopes, optics, and instrumentation. He also set the objective for the organization to build and implement a global telescope system. In 2005, Rosing established the global telescope version of Las Cumbres Observatory.

LCO initially acquired the two Faulkes 2 meter telescopes. Faulkes Telescope North (FTN) located at Haleakala Observatory, on Maui, Hawaii, and Faulkes Telescope South (FTS) at Siding Spring Observatory (SSO), in eastern Australia. LCO also purchased the company that built the Faulkes telescopes, Telescope Technologies Limited of Liverpool, with the intent of installing additional 2-meter telescopes at different sites to form a robotically operated network. Over the next few years, Rosing and the LCO staff came to understand that a network composed of many smaller telescopes would provide greater observing capacity. The organization designed its own 1 meter telescope with a plan to locate several of these at each chosen site. An even smaller 40 cm telescope was also developed primarily for use in education projects.

After completion of the construction and installation of these telescopes, LCO began its transition to operating a global observatory. In 2013, a Board of Directors was established and a President was hired to lead the organization. Full science scheduling began on 1 May 2014, with the two 2 meter and nine 1 meter telescopes operating as a single, integrated, observatory. The 40 cm telescopes were added to this system as they were commissioned.

The National Science Foundation made an award to LCO in 2016 through its Mid-Scale Innovations Program, purchasing access to the LCO network for all astronomers at U.S. institutions. The goal of this program is to prepare this community to carry out effective research following discoveries being made by current and future time domain astronomy surveys.

LCO operates its network at seven sites. The operating sites are all professional astronomical observatories.

In the southern hemisphere: 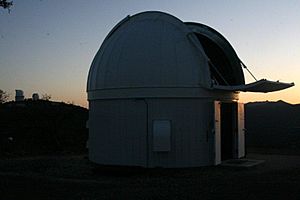 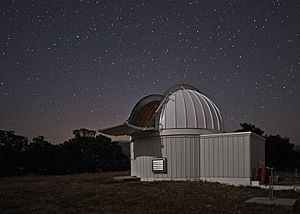 In the northern hemisphere:

The Ali Observatory in western Tibet will be added as the telescopes there become operational. 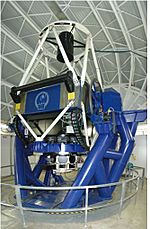 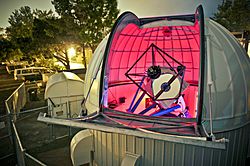 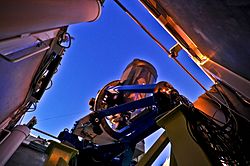 The 2 meter telescopes are the two Faulkes telescopes built by Telescope Technologies Ltd. They are f/10 Ritchey-Chrétien optical configurations on alt-az mounts.

The 1 meter telescopes are f/7.95 Ritchey-Chrétien optical systems on equatorial mounts. They have a 50 arcminute-diameter fully corrected field of view.

The 40 centimetres (16 in) telescopes use the optics and tubes from Meade 16 inch RCX telescopes. The mount has been replaced by a scaled-down version of the LCO 1 meter telescope mount.

The 2 meter telescopes are instrumented with optical imagers and low-resolution optical spectrographs (FLOYDS).

The 1 meter telescopes are instrumented with “Sinistro” optical imagers that have a 26 arcminute square field of view. During 2017, a set of high-resolution (R = 50,000), high-stability spectrographs (NRES) were deployed to four of the LCO sites to be coupled by optical fibres to the 1 meter telescopes.

The 40 centimetres (16 in) telescopes are equipped with SBIG STX-6303 optical imagers.

The global telescope network operates as a single observatory. Users request observations only for a generic class of telescope/instrument and the software scheduler determines an optimum observing schedule for each telescope. The scheduler revises the observing schedules for all telescopes as necessary and updates can be provided within 15 minutes. The rapid-response request mode bypasses the scheduler and can begin an observation within a few minutes after submission. Each telescope carries out a nightly calibration program and adjusts its pointing and focus several times per night.

The telescopes are all instrumented uniformly to facilitate the combining of data from multiple telescopes or sites. Data are returned to LCO headquarters, where they are processed to remove instrumental signature and ingested into an archive. Users have immediate access to their observations and all data are made public after 12 months.

The network is available to researchers at institutions that are members of the LCO science collaboration. Institutions that operate the sites hosting the LCO telescopes and a few institutions that have contributed resources to help build the network are members of the collaboration. The entire U.S. astronomical community gained access to the LCO network in 2016 as a result of an award from the National Science Foundation's Mid-Scale Innovation Program. The program is administered through a peer-review proposal process run by the National Optical Astronomy Observatory. Several science teams and individuals also purchase time on the LCO network.

The design and operation of the LCO global telescope network provide the unique capabilities required for time domain astronomy. The LCO network offers the ability to observe objects or events continuously and the ability to obtain data rapidly upon the discovery or announcement of an event.

The LCO network has been used to study supernovae and other explosive transients; exoplanets, through observations of both transits and microlensing; asteroids; and AGN variability. In 2017 LCO played a critical part in two major discoveries: first visible counterpart of a gravitational wave event, and a new type of supernova with successive explosions.

Since the beginning of LCO, education has been one of its core missions. In 2017, for the first time in LCO's history it issued an open call for education partners, Global Sky Partners—groups who could use their robotic telescopes to inspire diverse audiences with educational and outreach projects that they support. In 2019 there are 20 LCO Global Sky Partners based in the US, Europe, Sub-Saharan Africa, the Middle East, Australia, or running entirely online programs, for students, teachers, and the wider public. In 2019 the reported direct impact of the program was 13,000 individuals exclusively using the LCO 0.4-meter network, predominantly school children and teachers.

The LCO education team also maintains in-house educational programs to trigger observations and make use of data from the LCO network. These programs are designed to inspire anyone with an interest in astronomy to explore science using robotic telescopes. Recent successful programs include Asteroid Tracker, Agent Exoplanet, and Serol's Cosmic Explorers.

All content from Kiddle encyclopedia articles (including the article images and facts) can be freely used under Attribution-ShareAlike license, unless stated otherwise. Cite this article:
Las Cumbres Observatory Facts for Kids. Kiddle Encyclopedia.