Kids Encyclopedia Facts
Not to be confused with Lassan.

Lasan (Hindi: लसन) is an Indian restaurant located in St Paul's Square, Jewellery Quarter, Birmingham, England, and was co-founded by Aktar Islam and Jabbar Khan in 2002. In 2009, it became the first Indian restaurant in the United Kingdom to be selected as the "Best Local Restaurant" by Gordon Ramsay on Channel 4's The F Word.

In April 2002, two British Bangladeshi entrepreneurs, Aktar Islam and Jabbar Khan, co-founded Lasan in St Paul's Square, Jewellery Quarter, Birmingham. Islam is the head chef as well as the director. The 64-seater restaurant serves modern, contemporary Indian cuisine with modern and minimalist décor and was the first Indian restaurant in Birmingham that did not serve Balti.

In 2010, Islam and sous chef, Aysan Shaikh, won the "Best Local Indian Restaurant" category for Lasan on Channel 4's The F Word after beating Curry Corner from Cheltenham in the semi-final. They then went on to win the overall final, after beating The Pheasant from Keystone. Islam and Shaikh cooked a selection of three dishes for 50 food critics, scoring 70 out of 100 to The Pheasant's 61. 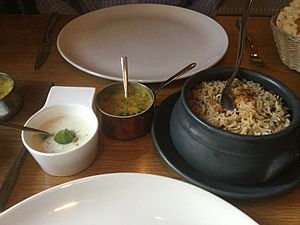 Hydrabadi Biryani with lentils and raita, at Lasan

All content from Kiddle encyclopedia articles (including the article images and facts) can be freely used under Attribution-ShareAlike license, unless stated otherwise. Cite this article:
Lasan Facts for Kids. Kiddle Encyclopedia.