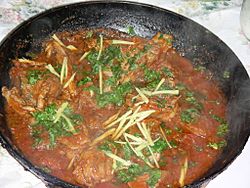 A lamb version of balti gosht

A balti or bāltī gosht (Urdu: بالٹی گوشت, Hindi: बाल्टी गोश्त) is a type of curry served in a thin, pressed-steel wok called a "balti bowl". The name may have come from the metal dish in which the curry is cooked, rather than from any specific ingredient or cooking technique. Balti curries are cooked quickly using vegetable oil rather than ghee, over high heat in the manner of a stir-fry, and any meat is used off the bone. This combination differs sharply from a traditional one-pot Indian curry which is simmered slowly all day. Balti sauce is based on garlic and onions, with turmeric and garam masala, among other spices.

Balti gosht is eaten in Pakistan and North India, as well as other parts of the world, such as Great Britain. The food seems to have arrived in England in Birmingham in 1971; sources suggest it originates from Baltistan in northern Pakistan.

Balti, as a food, is named after the steel or iron pot in which it is cooked. The word is found in Hindustani, Odia and Bengali, and means "bucket". The word developed from the Portuguese balde, meaning bucket or pail, and traveled to the Indian subcontinent via the Portuguese seafaring enterprises of the early 16th century. The word likely made its way into the English language during the time of British India.

According to Pat Chapman, a food historian, the origins of the word can be traced to the area of Baltistan, in northern Pakistan, where a cast-iron wok, similar to the Chinese wok, is used for cooking. Baltistan shares a border with China. In his Curry Club Balti Curry Cookbook, Chapman states:

The balti pan is a round-bottomed, wok-like heavy cast-iron dish with two handles. ... The origins of Balti cooking are wide ranging and owe as much to China (with a slight resemblance to the spicy cooking of Szechuan) and Tibet, as well as to the ancestry of the Mirpuris, the tastes of the Moghul emperors, the aromatic spices of Kashmir, and the 'winter foods' of lands high in the mountains.

However, Colleen Taylor Sen states that the origins of balti gosht are unclear, as the food eaten in Baltistan "bears no resemblance" to balti gosht. As such, the name of the food may have originated from the fact that bāltī gosht is cooked in a pot resembling a baltī, the Hindustani word for bucket.

Another claim regarding the origin of balti cooking in Birmingham was that it was first served in 1977 in a restaurant called Adil's. At that time, the restaurant was located in Stoney Lane, Sparkbrook, and after some time relocated to another area, but since has returned to its original place in Stoney Lane. 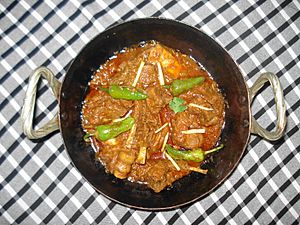 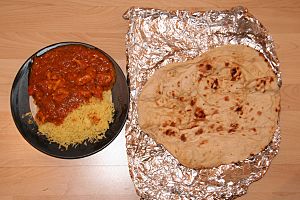 Balti chicken with rice and naan from Edinburgh, Scotland

Balti restaurants are often known in Birmingham as 'balti houses'. Some balti houses have a plate of glass on the table top with menus secured beneath. Balti houses typically offer large karack naan bread pieces, to be shared by the whole table.

Balti houses were originally clustered along and behind the main road between Sparkhill and Moseley, to the south of Birmingham city centre. This area, comprising Ladypool Road, Stoney Lane, and Stratford Road, is still sometimes referred to as the 'Balti Triangle', and contains a high concentration of balti restaurants. On 28 July 2005, a tornado caused extensive damage to buildings in the triangle, forcing many restaurants to close. Most reopened by the beginning of 2006.

Balti restaurants have now spread beyond the triangle, and can also be found in the south of Birmingham, along the Pershore Rd in Stirchley. Lye near Stourbridge to the west of Birmingham has become known as the 'Balti Mile' with up to a dozen restaurants clustered along the High Street.

The food and its style of presentation proved very popular during the 1980s, and popularity grew in the 1990s. Balti restaurants gradually opened up throughout the West Midlands, and then a large part of Britain. The expanded curry market in Britain is now said to take in 4 billion pounds sterling per year, but some still claim that it is impossible to get a 'proper' balti outside the urban West Midlands.

Outside Britain, a small number of balti houses are in Ireland and many other English-speaking countries, particularly New Zealand and Australia.

Since the late 1990s, British supermarkets have stocked a growing range of prepacked balti meals, and the balti restaurant sector has since faced increasing competition from the retail sector and from changes in customer tastes, along with other traditional South Asian and Indian restaurants.

All content from Kiddle encyclopedia articles (including the article images and facts) can be freely used under Attribution-ShareAlike license, unless stated otherwise. Cite this article:
Balti (food) Facts for Kids. Kiddle Encyclopedia.