Banded sea kraits are often seen in large numbers in the company of hunting parties of giant trevally (Caranx ignobilis) and goatfish. Their cooperative hunting technique is similar to that of the moray eel. The kraits flush out prey from narrow crevices and holes. Kraits need to drink fresh water and regularly come onto land for that purpose.

While probing crevices with their head, they cannot see approaching predators. But they can fool their potential enemies into thinking their tail is the head. Both colouration and tail movements are like the head. 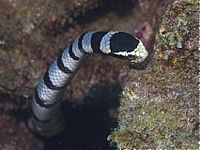 Female yellow-lipped sea kraits are longer than males. Females can grow up to the length of 1.6 meters, while males grow up to the length of 1 meters. Yellow-lipped sea kraits are light or dark blueish-grey on the top and yellow underneath with black bands running down the body and tail. The upper lip and snout is yellow (hence its name) while the rest of the head is black. They are very venomous but they are not aggressive and rarely ever bite divers or swimmers.

All content from Kiddle encyclopedia articles (including the article images and facts) can be freely used under Attribution-ShareAlike license, unless stated otherwise. Cite this article:
Yellow-lipped sea krait Facts for Kids. Kiddle Encyclopedia.