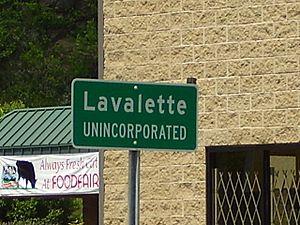 Lavalette is a census-designated place (CDP) in Wayne County, West Virginia, in the United States. As of the 2010 census, its population was 1,073. Lavalette is located at the intersection of West Virginia Route 152 and West Virginia Route 75, eight miles south of Huntington. The town is near Beech Fork Lake, a popular location for boating and fishing, and Twelvepole Creek. Lavalette was named after Lavalette Miller, the daughter of a Norfolk & Western Railway official.

Lavalette is a part of the Huntington-Ashland, WV-KY-OH, Metropolitan Statistical Area. As of the 2010 census, the MSA had a population of 287,702.

All content from Kiddle encyclopedia articles (including the article images and facts) can be freely used under Attribution-ShareAlike license, unless stated otherwise. Cite this article:
Lavalette, West Virginia Facts for Kids. Kiddle Encyclopedia.