Cordero was born León Esteban Febres-Cordero Ribadeneyra on 9 March 1931 in Guayaquil, Ecuador. He studied at the Stevens Institute of Technology in New Jersey. Cordero married María Eugenia Cordovez in 1958. Their marriage would last until his death in 2008. 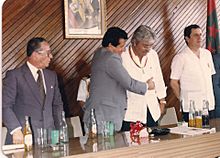 Cordero and Manuel Félix López at a meeting, 1985

He was known in the Ecuadorian media as LFC or by his surname (Febres-Cordero). He was President of Ecuador of Ecuador for a four-year term. He was inaugurated on 10 August 1984. He succeeded Osvaldo Hurtado. During his Presidency he sought to introduce market-oriented reforms, and also led a security crackdown on a guerilla group, ¡Alfaro Vive, Carajo!. He was known for being a close ally to President of the United States Ronald Reagan.

In 1987 Febres Cordero was kidnapped for 11 hours by members of the air force demanding the freedom of General Frank Vargas Pazzos, who had been imprisoned after leading two uprisings in March 1986, aimed at toppling the Minister of Defense.

Congress approved a resolution granting Vargas amnesty, but Febres Cordero refused to publish the resolution, thus denying it the force of law. It was only after his January 1987 kidnapping that he signed the amnesty and released Vargas.

Cordero's presidency ended in 10 August 1988. He was succeeded by Rodrigo Borja Cevallos.

Shortly after his presidency, Cordero became Mayor of Guayaquil. He was inaugurated on 10 August 1992. Cordero succeeded Harry Soria Lamán. His term would last until his retirement in 10 August 2000. He was succeeded by Jaime Nebot.

Cordero lived in Guayaquil. He had four children with his wife of fifty years. Cordero was a smoker. He made many visits to the United States and Columbia. He once met with Ronald Reagan to discus foreign relations.

Cordero died on 15 December 2008 in Guayaquil, Ecuador from lung cancer and emphysema, aged 77.

All content from Kiddle encyclopedia articles (including the article images and facts) can be freely used under Attribution-ShareAlike license, unless stated otherwise. Cite this article:
León Febres Cordero Facts for Kids. Kiddle Encyclopedia.