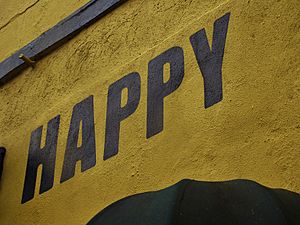 Le Happy is a family-friendly crêperie in the Northwest District of Portland. It is known as a late-night destination, operating from 5pm to 1am Monday through Thursday, 5pm to 2:30am on Friday, and 6pm to 2:30am on Saturday. The exterior features a yellow façade and a string of white lights. Inside is a small kitchen to house a single chef. Interior decorations includes red lights, artificial flowers above the bar, broken eyeglasses affixed to the wall, and votive candles set at tables. Board games are available for use by diners.

All content from Kiddle encyclopedia articles (including the article images and facts) can be freely used under Attribution-ShareAlike license, unless stated otherwise. Cite this article:
Le Happy Facts for Kids. Kiddle Encyclopedia.