In this Korean name, the family name is Lee.

In a short span of his acting career, he became a most popular actor worldwide.

He made his debut in 2006 through a EBS TV drama Secret Campus and became popular across Asia in Boys over flowers (2009), then he gained fame in Europe with City hunter (2011) and also became popular in African continent with his drama The King: Eternal Monarch (2020).

He is the first Korean celebrity to have a wax figure made in his image at Madame Tussauds in 2013 and Grevin Museum Paris in 2018. 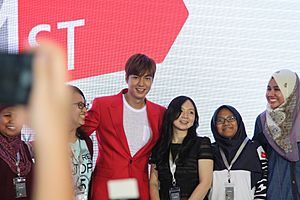 All content from Kiddle encyclopedia articles (including the article images and facts) can be freely used under Attribution-ShareAlike license, unless stated otherwise. Cite this article:
Lee Min Ho Facts for Kids. Kiddle Encyclopedia.