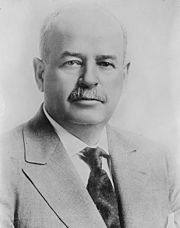 Small was born on June 16, 1862 in Kankakee County, Illinois. He studied at Valparaiso University.

Small was indicted in office for corruption. He was acquitted; thereafter, eight of the jurors received state jobs. Among his defense lawyers was former governor Joseph W. Fifer, who asserted, in pre-trial hearings, that the governorship has the divine right of kings.

All content from Kiddle encyclopedia articles (including the article images and facts) can be freely used under Attribution-ShareAlike license, unless stated otherwise. Cite this article:
Len Small Facts for Kids. Kiddle Encyclopedia.