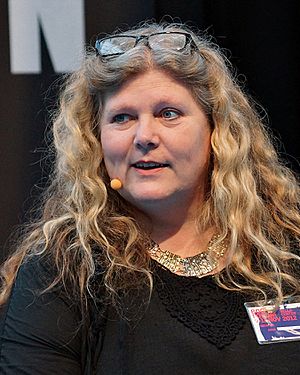 Lene Kaaberbøl (born in 1960) is a Danish writer born in Copenhagen, Denmark. Her work primarily consists of children's fantasy series and crime fiction for adults. She received the Nordic Children's Book Prize in 2004. In 2009 Kaaberbøl with her co-author Agnete Friis was awarded the Harald Mogensen Prize by the Danish Criminal Academy (Det danske Kriminalakademi, DKA) for novel The boy in the suitcase. In 2018 her Wild Witch (Vildheks) book series (2011–2014) provided the basis for a Danish children's fantasy film of the same name.

Born in Copenhagen, Lene Kaaberbøl grew up in the small town of Malling, in the countryside south of Aarhus in Jutland. She got her first book published when she was only 15 years old. It was also the first book of what became the Tina series and it has never been translated. Graduated from Aarhus Katedralskole and educated with a degree in both English and Dramaturgy from Aarhus University, she has worked as a high school teacher and a translator, but her working life has been very diverse and she also made a living as a cleaning lady at one time. Having resided on Zealand, Kaaberbøl now lives in Sark, in the Channel Islands, close to France.

All content from Kiddle encyclopedia articles (including the article images and facts) can be freely used under Attribution-ShareAlike license, unless stated otherwise. Cite this article:
Lene Kaaberbøl Facts for Kids. Kiddle Encyclopedia.