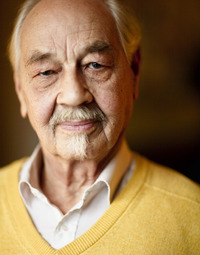 Paul Lennart Hellsing (5 June 1919 – 25 November 2015) was a Swedish writer and translator. His lasting contribution as a children's writer, Helsing was a finalist in 2010 for the biennial, international Hans Christian Andersen Award, the highest recognition available to creators of children's books. He was born in Västanfors, Sweden. He was known for his rhymes and word plays. He was thought to be an "outstanding poet" in the field of humour and nonsense writing.

Hellsing died at his home in Stockholm, Sweden of pneumonia on the night of 25 November 2015 surrounded by his family, aged 96.

All content from Kiddle encyclopedia articles (including the article images and facts) can be freely used under Attribution-ShareAlike license, unless stated otherwise. Cite this article:
Lennart Hellsing Facts for Kids. Kiddle Encyclopedia.