Leo's Tavern (Irish: Tábhairne Leo) is a restaurant and pub in the Donegal Gaeltacht, known as the home of music artists Clannad, Enya and Moya Brennan. The pub opened in 1968 and held Irish traditional music sessions nightly, becoming the musical starting block for the children of Leo Brennan, the pub's founder.

At the end of Ireland's showband era, musician Leo Ó Braonáin settled with his wife Máire "Baba", opening Tábhairne Leo in 1968. The pub became a gathering place for musicians and singers to take part in Irish traditional music sessions. While working shifts behind the bar, Leo's children Máire (Moya), Ciarán and Pól Ó Braonáin and Noel and Pádraig Ó Dúgáin would accompany their father on stage to tell old Irish stories, or seanchas, to the locals. While touring in later years, the siblings and their uncles, as Celtic/Folk band Clannad, their younger siblings Brídín, Eithne (Enya), Olive and Deirdre would perform. 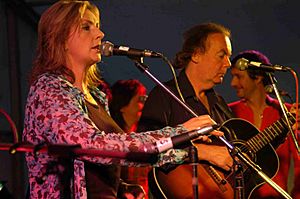 Since Clannad, Moya and Enya's success, the pub has welcomed guests such as Bono (who recorded the music video for In a Lifetime close by with Clannad), The Edge, Paul Brady, Christy Moore, Mairéad Ní Mhaonaigh and Mary Black to perform. Tour buses of tourists began to visit the pub to hear Leo sing and tell stories.

The pub was renovated in 2003. It now also has a restaurant and features Gold, Platinum and Diamond discs and memorabilia associated with Clannad, Moya and Enya. The pub was reopened by Moya Brennan with her parents and siblings with music from the family and other musicians. 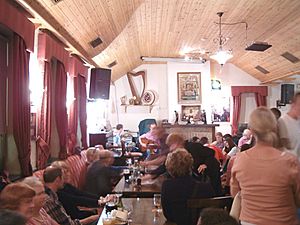 The tavern was celebrated during the 2005 Errigal Arts Festival, at which Leo and Baba Brennan were awarded the Freedom of Donegal by Donegal County Council. The ceremony was held on 14 July and attended by members of both Seanad Éireann and Dáil Éireann. A series of concerts were held in the days before and after the civic reception. Called Oidhreacht (Irish for Legacy), these featured Leo and Baba's daughters Moya, Brídín, Enya, Deirdre and Olive performing during an invitation mass at St. Mary's Church in Derrybeg where Baba was choirmaster for over four decades. A jazz concert was held, featuring Pól Brennan, Paddy Cole and their bands. Some of these events were televised for Irish language television channel TG4 and Ireland's state broadcaster, RTÉ.

All content from Kiddle encyclopedia articles (including the article images and facts) can be freely used under Attribution-ShareAlike license, unless stated otherwise. Cite this article:
Leo's Tavern Facts for Kids. Kiddle Encyclopedia.