Kids Encyclopedia Facts
This page is about American frog sometimes known as the white-lipped frog. For other uses, see White-lipped frog (disambiguation). 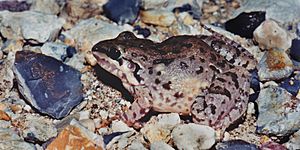 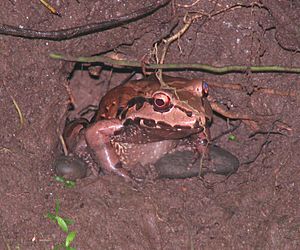 Mexican white-lipped frogs are grey-brown in color with brown or black mottling. They have a distinctive white stripe along their upper lip which gives them their name. They grow to 3–5 cm (1.2–2.0 in) in length.

Mexican white-lipped frog is a widespread and common species found in a range of habitats, in savanna, grassland, semi-arid lands, and open habitats in humid and dry, lowland and montane tropical forests. It is often seen near water.

Mexican white-lipped frogs are nocturnal and carnivorous. During the heat of the day, they bury themselves in loose soil of roadside ditches, irrigated cropland, or grasslands, and emerge to feed in the evenings.

All content from Kiddle encyclopedia articles (including the article images and facts) can be freely used under Attribution-ShareAlike license, unless stated otherwise. Cite this article:
Leptodactylus fragilis Facts for Kids. Kiddle Encyclopedia.