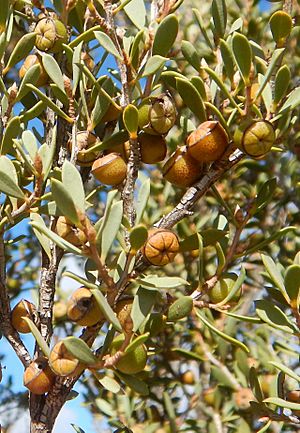 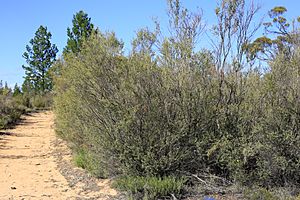 Leptospermum coriaceum, commonly known as green tea-tree or mallee teatree, is a shrub species that is endemic to south-eastern Australia. It has smooth bark on the younger stems, elliptic to narrow egg-shaped leaves, white flowers and woody fruit. The usual habitat is mallee on sand dunes.

The green tea-tree was first formally described in 1856 by Ferdinand von Mueller who gave it the name Fabricia coriacea and published the description in a paper in the journal Nederlandsch Kruidkundig Archief. (The paper was written by Friedrich Anton Wilhelm Miquel but the name and descriptive paragraphs are attributed to Mueller.) In 1923, Edwin Cheel changed the name to Leptospermum coriaceum. The specific epithet (coriaceum) is a Latin word meaning "leathery".

All content from Kiddle encyclopedia articles (including the article images and facts) can be freely used under Attribution-ShareAlike license, unless stated otherwise. Cite this article:
Leptospermum coriaceum Facts for Kids. Kiddle Encyclopedia.