Liam Tarquin Broady (born 4 January 1994) is a professional tennis player and current British No. 5. In 2010, he won the Boys' Doubles at Wimbledon with Tom Farquharson, and the Boys' Doubles at the Australian Open with Joshua Ward-Hibbert, as well as reaching the Boys' Singles finals at Wimbledon 2011 and US Open 2012, peaking at No. 2 in the junior world rankings. He currently plays on the ATP Tour (professional circuit) and is coached by David Sammel.

Broady, who is the younger brother of fellow tennis player Naomi Broady, and has another sister, Emma and a brother, Calum, grew up in Heaton Chapel, Stockport. Their parents, Shirley and Simon, took Liam and Naomi to tennis tournaments.

Broady started playing table tennis at the age of four and went to Matchpoint in Bramhall for lessons. His first tournament was at the age of eight and he showed potential at ten.

He attended Norris Bank primary and Priestnall School where he completed his GCSEs in 2010.

In 2007, the Lawn Tennis Association suspended his seventeen-year-old sister Naomi's funding, for 'unprofessional' postings on a social networking site. Their father Simon was so angry with the decision that he withdrew Liam, then aged thirteen, from the LTA programme. Simon sold the family home and downsized to a modest red brick terrace to fund their travel and coaching. Two weeks later, the LTA offered to restore their funding, but Simon refused, and they trained at the Mouratoglou Tennis Academy on the outskirts of Paris. In 2012, he decided to accept help from the LTA, leading to his estrangement from his father, and they did not speak to each other for several years. When Liam returned to Manchester, he stayed with his sister Emma. In November 2015, Broady ended his LTA funding to heal the rift with his father, and he now funds himself, renting his own flat in the Heatons, Manchester. Broady trained at the Northern Tennis Club, David Lloyd Fitness and Life Leisure by Broadstone Mill. Broady played Davis Cup for the 2018 tie against Spain, while Naomi Broady has declined to play Fed Cup for Great Britain.

In late 2016 he moved his training base to the University of Bath and is currently coached by Dave Sammel. 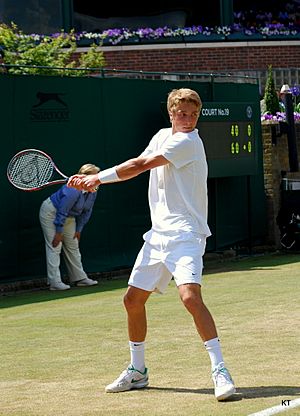 In 2005 Broady won the Natwest Dorset Open which marked the start of his career. In 2008, he was crowned European Masters under-14 champion in Orbetello, Italy – a title once won by Rafael Nadal. At the 2010 Wimbledon Championships, Broady partnered Tom Farquharson to the final where they defeated fellow Britons Lewis Burton and George Morgan. The pair became the first British partnership to win the title since 1995.

At Wimbledon in 2011, Broady beat Germany's Robin Kern 7–6 (7–4) 4–6 13–11 to reach the semi-finals of the boys' singles and followed that victory with another against Australian Jason Kubler with the match ending 6–4 6–3 in the Brit's favour to ensure a place in the final. He lost in the final 6–2 4–6 2–6 to Australian Luke Saville. Broady finished 2011 by partnering Joshua Ward–Hibbert to the Dunlop Orange Bowl doubles title. The 2012 season saw Broady reach the boys' semifinals at the US Open for the first time, and go on to make the final, where he lost against Filip Peliwo 2–6, 6–2, 5–7 in a tightly fought match.

As a junior Broady has reached as high as No. 2 in the junior combined world rankings in March 2012.

In 2009, at the age of 15, Broady began playing on the Futures Circuit, both in singles and doubles. In July 2009, Broady won his first main draw singles match against the 19-year-old Duncan Mugabe at the GB F8 in Felixstowe. In 2010, Broady beat four adult players on the Futures tour.

In February 2011, Broady reached the semifinals of the France F3 in Bressuire. In July 2011, Broady won his first doubles title with Dan Evans at the Chiswick GB Futures F11. Elsewhere, he lost the first or second rounds in 13 out of 18 singles tournaments. Broady was coached by Mark Hilton at Nottingham.

Broady's difficulties continued with 7 first round defeats, and he considered giving up. So, now eighteen years old, he left the Mouratoglou Tennis Academy to accept funding from the LTA, causing a rift with his father, and they did not speak to each other until 2015. Mark Hilton became his full-time coach. In November, Broady made the semifinals of the USA F30 in Florida.

Broady, having added David Sammel to his team appeared in his first Challenger final in November, facing James Duckworth in the final of the Charlottesville Challenger, where he ultimately lost in three sets; however, his run to the final launched him into the top 200 for the first time, with a career-high ranking of 188th in the world. Throughout 2014, Broady's ranking rose up 271 places from 470th at the beginning of the year, becoming the 3rd ranked British player.

He came from two sets down to win his first singles match at Wimbledon against Marinko Matosevic. He lost in the second round to David Goffin.

In February, Broady won the Great Britain F1 Futures held in Glasgow. On the Challenger circuit, he appeared in the Tapei semi final, and two quarter finals. He was defeated in the first round of Wimbledon by British number one Andy Murray.

At the St Petersburg Open in September 2017, Broady became the first Team Bath Tennis player to reach the quarter-finals of an ATP World Tour singles tournament. He followed that up by finishing runner-up in the Las Vegas Tennis Open, an ATP Challenger Tour event, in October 2017.

Broady lost in the first round of qualifying draw the Australian Open, marking seven failures to qualify for Grand Slam main draws in seven attempts.

In February, Broady made his Davis Cup debut representing Great Britain. He lost in straight sets to Albert Ramos-Vinolas, leaving the British team 0–1 down against Spain.

In May, Broady lost to world no. 366 Filippo Baldi in straight sets in the second round of a Challenger event in Francavilla, Italy.

He followed this with a second-round loss in the Lisbon Challenger (despite being seeded seventh) and a first-round loss in French Open qualification.

Broady failed to win a single match in the grass-court season, losing in the first round of the Surbiton Challenger, Ilkley Challenger, Nottingham Challenger and winning only seven games in a first-round loss at Wimbledon (where he received a wild card).

Broady's poor form continued, with a straight-set loss to world No. 755 Benjamin Sigouin in a minor Challenger event in Gatineau. He also lost in straight sets in doubles.

Following a lengthy break due to the Coronavirus pandemic, Broady started the new season well reaching consecutive ATO Challenger finals and qualifying for the first round of the Miami Masters main draw. Consequently, Broady reached a career-high ranking of No. 137 on 19 April 2021.

He played in a doubles partnership with Andy Murray in the Italian Open in Rome in May. They beat Australians Max Purcell and Luke Saville in the first round, but were beaten by Kevin Krawietz and Hora Tecau in the second round.

Current through the 2021 Wimbledon Championships.

All content from Kiddle encyclopedia articles (including the article images and facts) can be freely used under Attribution-ShareAlike license, unless stated otherwise. Cite this article:
Liam Broady Facts for Kids. Kiddle Encyclopedia.