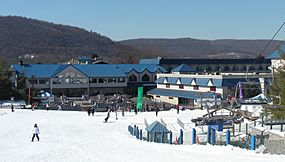 Liberty Mountain Resort is a resort located in southern Pennsylvania. During the winter months the resort offers skiing, snowboarding, and snow tubing. The onsite hotel and lodge is open year-round and offers 114 rooms and multiple options for weddings and meetings. During the spring, summer, and fall the 18 hole Carroll Valley Golf Course at Liberty Mountain is open for a round of golf.

Vail Resorts purchased Liberty Mountain from Peak Resorts, along with Peak's 16 other resorts, in 2019.

The resort was originally developed in the mid 1960s as a focal point for a major real estate development. The name of the ski mountain and the development was Charnita, named after Charles and Anita Rist, the developer and his wife. Charlie Rist hired Dick Brown, who had just designed the neighboring Ski Roundtop the year before, to develop and manage the Charnita ski area. After the Tri-County Citizens Committee efforts "to prevent the continued growth of the Charnita development" in 1970, the development suffered bankruptcy.

Irv Naylor, the owner and founder of Snow Time, Inc. purchased the mountain in 1974 and renamed it Ski Liberty. It was renamed again in the late 1990s to Liberty Mountain Resort.

In 2003, Snow Time, Inc added the Boulder Ridge Snow Tubing area. In May 2010 Liberty Mountain purchased The Carroll Valley Resort giving Liberty a total of 99 rooms as well as adding two more restaurants (The Tavern on the Green and The Inn) and an 18-hole golf course. In 2015, Liberty Mountain completed building the new Highland Lodge which brought their total number of hotel rooms up to 116, while adding state-of-the-art meeting and conference space, as well as replacing the two restaurants from Carroll Valley with Eagle & the Owl, a public house themed restaurant and Ike's Chophouse.

Liberty Mountain possesses slopes with varying levels of difficulty. The trail names are as follows:

The Half Pipe at Liberty Mountain has since been removed as it was deemed too much work to maintain and cover with snow. The Half Pipe was usually only open for at most a month of the ski season, but some years not even open at all. The area where the Half Pipe was located was filled in and is now the East Side terrain park.

All content from Kiddle encyclopedia articles (including the article images and facts) can be freely used under Attribution-ShareAlike license, unless stated otherwise. Cite this article:
Liberty Mountain Resort Facts for Kids. Kiddle Encyclopedia.