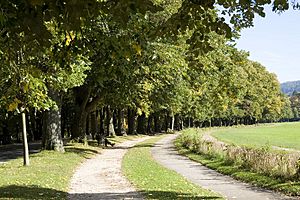 The Lichtentaler Allee is a 2.3 kilometers long street in Baden-Baden. But it is also the name of the park around that street. It became popular in the 19th century when a lot of noble and rich people met in Baden-Baden and walked at that street. For them it was a place to be. The Lichtentaler Allee follows the river Oos. A lot of seldom trees and plants can be seen there.

All content from Kiddle encyclopedia articles (including the article images and facts) can be freely used under Attribution-ShareAlike license, unless stated otherwise. Cite this article:
Lichtentaler Allee Facts for Kids. Kiddle Encyclopedia.