The light clock is a simple way of showing a basic feature of Special relativity. A clock is designed to work by bouncing a flash of light off a distant mirror and using its return to trigger another flash of light, meanwhile counting how many flashes have occurred along the way. It is easy to show that people on Earth watching a spaceship fly overhead with such a clock would see it ticking relatively slowly. This effect is called time dilation.

Before we study the light clock, consider another kind of relativity. Imagine that someone is dribbling a basketball in the hold of a large cargo jet. The basketball player is moving in the same direction as the jet airplane. The other people in the plane see him moving a meter or two as he makes one dribble. Between the time the ball bounces the first time and the ball bounces the second time, about one second has passed. But when the first bounce occurred the basketball was over Gibraltar, and when the second bounce occurred the basketball was over the water nearer to Spain. So the basketball has moved 280 meters with respect to Earth. 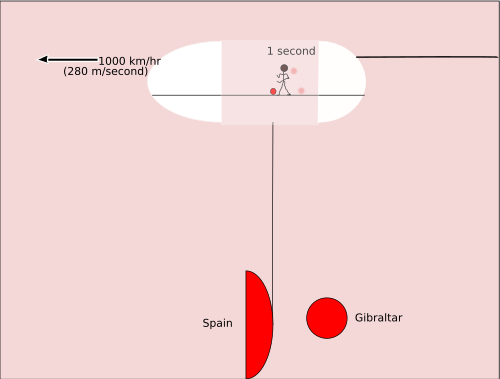 Now consider a somewhat similar question of relative motion. This time we are going to consider what people looking at stars from the North Pole see when a very fast spaceship flies over them. We can use algebra and the Pythagorean theorem to calculate how much time slows on the spaceship. The only other thing we need is the equation that relates distance, d, rate or speed of travel, r, and time, t. The equation is: 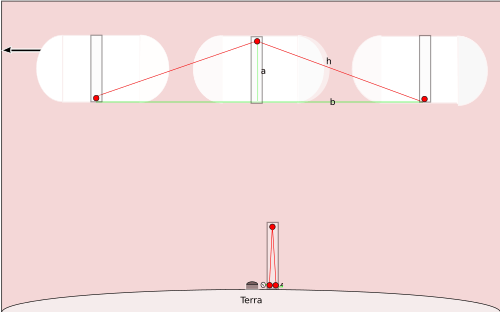 To make the math easier, we will say that the pole is one half kilometer long. So if we are standing by the light clock that is built next to the big telescope at the North Pole, we will see that light travels one kilometer for each "tick" of the light clock. Since distance traveled, d, equals speed multiplied by time, and the speed involved is c, we have the equation:

and we can solve this equation for t to learn how long in seconds each "tick" is.

If a spaceship were flying on a straight line passing over the North Pole at a large fraction of the speed of light, and it had a similar clock, people watching its passage would see that the mirror on top of the pole had moved from directly over the emitting light, so the light would travel along the line marked h in the diagram, and then it would follow the other hypotenuse back down to the base of the pole -- which would by now have moved some distance since the spaceship is moving so fast. We can figure out how much time one tick would take according to the people on Earth. We know that the spaceship's pole has a length of a since it is the same kind of clock as people are using at the North Pole. We want to figure out t' , the time it takes to make one tick of the clock on the spaceship.

We also know that the speed of light, c, is constant. No matter who measures it, it turns out to be the same speed. So we can use that fact to get another way of calculating how long it takes for the flash of light to go from the base to the top of the pole and back again:

So we can write

To solve the above equation, we will need to:

Solving the above equation we find that:

The time between ticks on the clock at the North Pole is 2a/c, so we can then write:

Experiment with various speeds of travel at: http://www.1728.org/reltivty.htm

All content from Kiddle encyclopedia articles (including the article images and facts) can be freely used under Attribution-ShareAlike license, unless stated otherwise. Cite this article:
Light clock Facts for Kids. Kiddle Encyclopedia.