Lime Rock (Limerock) is a village and historic district in Lincoln, Providence County, Rhode Island, United States, near Rhode Island Route 146. The village was named after the limestone quarries in the area, which started in the 17th century, and continue to the present where Conklin Limestone Company now operates. Because of the abundance of limestone in the area many houses had massive end chimneys and were called "stone enders," a distinctly Rhode Island style of architecture. The historic district includes 21 historically significant properties in an area extending from Wilbur Street, just west of its junction with Old Louisquisset Pike, eastward to Great Road, and then along Great Road as far as Simon Sayles Road. Among these properties are three quarries, and the ruins of three old lime kilns. It was listed on the National Register of Historic Places in 1974. 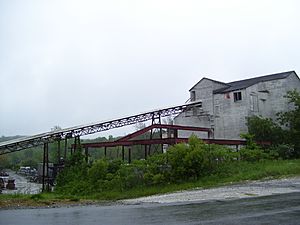 All content from Kiddle encyclopedia articles (including the article images and facts) can be freely used under Attribution-ShareAlike license, unless stated otherwise. Cite this article:
Lime Rock, Rhode Island Facts for Kids. Kiddle Encyclopedia.