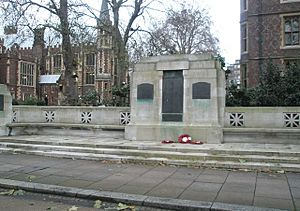 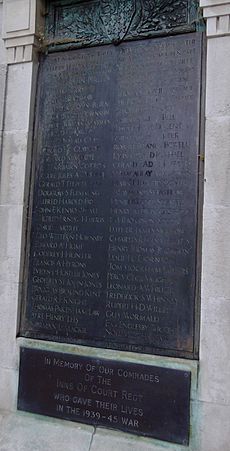 Lincoln's Inn War Memorial is a war memorial in Lincoln's Inn, London. It was erected in 1921 as a memorial to members of the Inn of Court who died on active service during the First World War. It became a Grade II listed building in 1999.

The Portland stone memorial comprises a central pylon with a curved screen incorporating seats to either side, terminating with piers at each end. The ensemble is about 46 feet (14 m) long and stands on a stone base with three steps.

Other war memorials in Lincoln's inn include a table, a book of remembrance, a plaque in the chapel, and a memorial to a Zeppelin air raid in 1915.

All content from Kiddle encyclopedia articles (including the article images and facts) can be freely used under Attribution-ShareAlike license, unless stated otherwise. Cite this article:
Lincoln's Inn War Memorial Facts for Kids. Kiddle Encyclopedia.