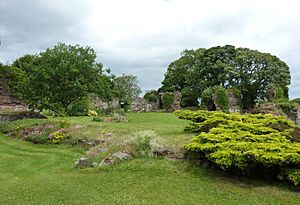 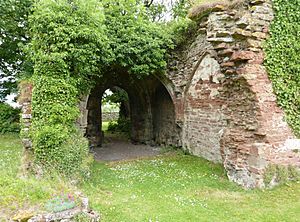 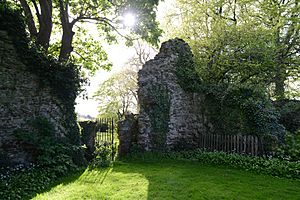 Lindores Abbey was a Tironensian abbey on the outskirts of Newburgh in Fife, Scotland. Now a reduced ruin, it lies on the southern banks of the River Tay, about 1-mile (1.6 km) north of the village of Lindores and is a scheduled ancient monument.

The abbey was founded as a daughter house of Kelso Abbey in 1191 (some sources say 1178), by David, Earl of Huntingdon, on land granted to him by his brother William the Lion. The first abbot was Guido, Prior of Kelso, under whom the buildings were mostly completed. The church, dedicated to the Blessed Virgin and St. Andrew, was 195 feet (59 m) long, with transepts 110 feet (34 m) long. Edward I of England, John Balliol, David II, and James III were among the monarchs who visited Lindores at different times. The Abbey ceased operation in 1559.

The Lindores Abbey distillery re-opened in 2017 and began distilling scotch whisky by December of that year. It is owned and operated by the McKenzie Smith family. 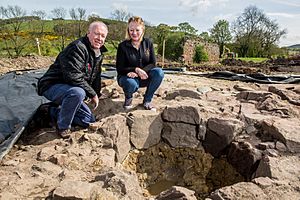 David Stewart, Duke of Rothesay, who died during imprisonment at Falkland Palace in 1402, was buried at the Abbey.

The abbey was sacked by a mob from Dundee in 1543, and again by John Knox and his supporters in 1559. According to one report, they "overthrew the altars, broke up statues, burned the books and vestments and made them cast aside their monkish habits", according to one report.

After the Reformation, the Abbey passed into the hands of a Commendator, one whose loyal service to the King was rewarded by the gift of the ecclesiastical income and property. The monks remained for a time, but the Abbey began to be dismantled around 1584. In the following years the Abbey buildings were quarried as a source of building stone for Newburgh, and slate, timber and carvings from the Abbey as well as a number of architectural fragments are visible built into later structures in the town.

The main upstanding remains of the Abbey are: one of the gateways leading into the monastic enclosure; the groin-vaulted slype, leading from the cloister garth to the exterior of the Abbey; and parts of the chancel walls and western tower of the church, although the ground plan of the whole structure can still be traced. Sections of the imposing precinct wall which once enclosed the abbey can also be seen in fields to the south.

Carved wooden panels from the Abbey of the early 16th century survive in the Laing Museum, Newburgh and, reset in a 19th-century cabinet, in St. Paul's Episcopal Cathedral, Dundee.

The earliest record of scotch whisky in the exchequer roll for 1494 is a payment from King James IV to Friar John Cor of Lindores Abbey for about "eight bols of malt" or 580 kg of aquavitae as it was then known. Brother John Cor (Johanni Cor/John Kawe) was a Tironensian monk based at Lindores Abbey.

The monks distilled rose water at the Abbey, and in May 1540 rosewater and apples from Lindores were sent to James V.

In 2018 a distillation vat was discovered in the ruins, along with evidence of whisky production. The remains of the still are preserved for display in the ruins. 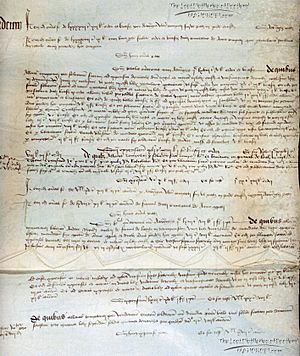 The Abbey is open to visitors and a whisky distillery, Lindores Abbey Distillery, in the Lowlands whisky region, is directly opposite the Abbey. It started distilling whisky in December 2017, using three stills made by Forsyths of Rothes. Lindores Abbey planned to produce 150,000 litres of spirit per year.

Scotch whisky must be aged a minimum of three years, in oak barrels, and the Abbey planned to age its products for five years. Hence, no whisky sales would be made until at least 2021. In the meantime, the distillery was selling its aqua vitae, since this type of alcoholic beverage does not require such long aging. 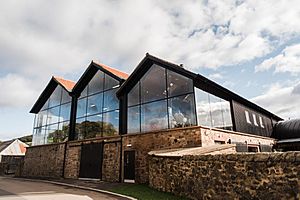 The barley used here is grown in Fife; since mid-2019, it has been the Concerto strain grown on two farms adjoining the abbey property. By the end of 2019, the distillery planned to use "locally grown Lindores barley exclusively".

All content from Kiddle encyclopedia articles (including the article images and facts) can be freely used under Attribution-ShareAlike license, unless stated otherwise. Cite this article:
Lindores Abbey Facts for Kids. Kiddle Encyclopedia.