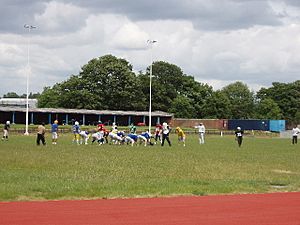 The venue first opened as the West London Stadium in 1967. It initially had a cinder track, which was upgraded to synthetic in 1973. Since 1993 it has been named after one of the club's most famous athletes, Olympic 100 metres gold medallist Linford Christie. There is a covered indoor straight. The venue was redeveloped between 2004 and 2006, when additional facilities for sports including football, rugby and hockey were installed. The work was funded by London Borough of Hammersmith and Fulham, the Football Foundation, Chelsea F.C. and Barclays. Chelsea players John Terry and Shaun Wright-Phillips attended the re-opening. The video for "So Many Roads" by Example was filmed here.

All content from Kiddle encyclopedia articles (including the article images and facts) can be freely used under Attribution-ShareAlike license, unless stated otherwise. Cite this article:
Linford Christie Stadium Facts for Kids. Kiddle Encyclopedia.