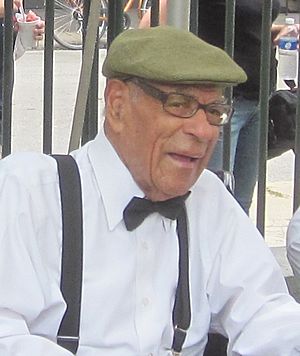 Lionel Charles Ferbos (July 17, 1911 – July 19, 2014) was an American jazz trumpeter. He was from New Orleans, Louisiana. At 103, Ferbos was the oldest jazz musician in New Orleans. He was trumpeter with the Ragtime on the soundtrack of the 1978 movie Pretty Baby.

All content from Kiddle encyclopedia articles (including the article images and facts) can be freely used under Attribution-ShareAlike license, unless stated otherwise. Cite this article:
Lionel Ferbos Facts for Kids. Kiddle Encyclopedia.