Lionel of Antwerp, 1st Duke of Clarence facts for kids 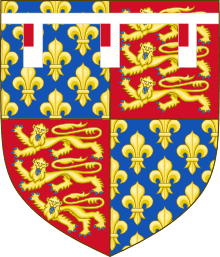 Lionel of Antwerp's Coat of Arms

He was Edward III's representative in England and in 1355 he was made the Earl of Ulster. He went to Dublin in 1361 to be the Chief Governor of Ireland. His father made him Duke of Clarence in 1362, and tried to have him made King of Scotland. Lionel and the government in Dublin were concerned about how the English settlers in Ireland were slowly become Irish. He brought in laws, the Statute of Kilkenny, in 1366, which made it against the law:

Lionel found it difficult to get control over Ireland and went back to England in 1367.

After the death of Elizabeth, Lionel married Violante, the daughter of Galeazzo Visconti, Lord of Pavia (d.1378), in Milan during June 1368. While travelling around Italy, Lionel became sick and died at Alba on October 7, 1368. He was buried at the Clare Priory, Suffolk, England.

All content from Kiddle encyclopedia articles (including the article images and facts) can be freely used under Attribution-ShareAlike license, unless stated otherwise. Cite this article:
Lionel of Antwerp, 1st Duke of Clarence Facts for Kids. Kiddle Encyclopedia.