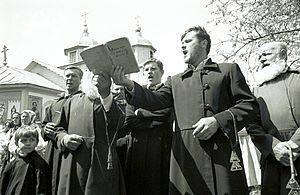 Lipovans or Lippovans (Romanian: Lipoveni, Ukrainian: Липовани, Russian: Липоване) are the Old Believers, mostly of Russian ethnic origin, who settled in the delta of the Danube River in Tulcea county in the Dobrogea region of eastern Romania and in the southwestern part of Odessa Oblast (in Budjak) as well as in Chernivtsi Oblast in Ukraine as well as in two villages in North-Eastern Bulgaria. According to the 2002 Romanian census there are a total of 35,791 Lipovans in Romania, of whom 21,623 still live in Dobrogea.

All content from Kiddle encyclopedia articles (including the article images and facts) can be freely used under Attribution-ShareAlike license, unless stated otherwise. Cite this article:
Lipovans Facts for Kids. Kiddle Encyclopedia.