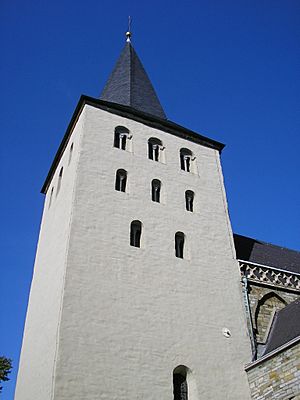 Lippstadt is a planned city in Westphalia. About 67,000 people lived there in 2008. The city is about 70 km east of Dortmund, and about 30 km west of Paderborn.

The city was founded in 1185. It is the oldest founded city in Westphalia. Founded cities did not grow from earlier settlements; they were made as cities from the beginning. Lippstadt is known because there were many witch trials in the city, especially between 1565 and 1573. The priest Anton Praetorius wrote in 1613, that "Nail-smith Ebert Balve and his sister, a baker were released from prison, despite protests from the population. They had been tortured for a long time, and they had withdrawn their confessions." This witchcraft trial left a lasting impression on Praetorius and may have changed his thinking. In 1597, he risked his life so that the torture of a woman be stopped. Later, he continued to fight against witch-trials and torture through his writings. There were more witch trials in Lippstadt between 1630 and 1677.

All content from Kiddle encyclopedia articles (including the article images and facts) can be freely used under Attribution-ShareAlike license, unless stated otherwise. Cite this article:
Lippstadt Facts for Kids. Kiddle Encyclopedia.