Anton Praetorius (1560 in Lippstadt – 6 December 1613 near Heidelberg) was a German Calvinist pastor, theologian and writer. 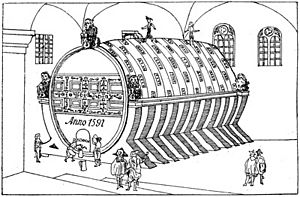 In 1596 he worked as a pastor in the church in Birstein near Frankfurt am Main in Hesse. There Praetorius worked for a prince and wrote church songs and books of religion in the year 1597.

Fight against the chase of witches

Praetorius fought against torture and against the hunting of witches. Some women were accused of being witches. People thought that witches can do harm to others. So these women were arrested and put in prison. 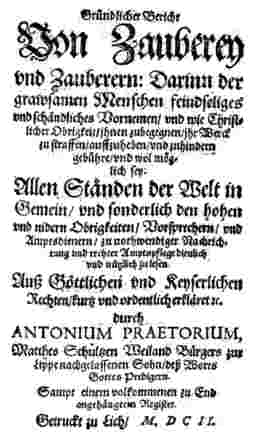 In 1597 Anton Praetorius protested against the torture of women accused of witchcraft.

Praetorius was so shocked about the torture of the accused woman that he demanded a stop. His protest was successful.

In 1598 he wrote a book to protest against torture and the prosecution of witches. The book was published again in 1602, 1613 and in 1629. Praetorius described the terrible situation of the prisoners and protested against torture.

Praetorius was a Protestant minister. He believed that man can do either good or bad things. However, God chooses certain people to do certain things. Those things can be good or bad. According to Praetorius, witchcraft can only be a fall from the favour of God, and a pact with the devil. But, neither the devil nor sorcerers can do more than is in their nature (and predestination). God will punish those who are witches or sorcerers. This however, does not give human courts a right to put those to death, they believe are guilty of the crime of witchcraft. For Praetorius, witchcraft cannot exist, because it is beyond the faculties of either man or the devil. It is also against Nature.

All content from Kiddle encyclopedia articles (including the article images and facts) can be freely used under Attribution-ShareAlike license, unless stated otherwise. Cite this article:
Anton Praetorius Facts for Kids. Kiddle Encyclopedia.