Pokémon: Black & White is the fourteenth season of the Pokémon animated series and the first part of Pokémon the Series: Black & White, covering the continuing adventures of series protagonist Ash Ketchum and his Pikachu as they travel to the new region of Unova. In Japan, this is the first portion of the Pocket Monsters: Best Wishes! (ポケットモンスター ベストウイッシュ, Poketto Monsutā Besuto Uisshu, literally "Pocket Monsters: Best Wishes!") branding of the anime series. It originally aired in Japan from September 23, 2010 to September 15, 2011 on TV Tokyo, and in the United States from February 12, 2011 to January 7, 2012 on Cartoon Network. Brock and Dawn have left the series, and Ash is joined by a new female trainer named Iris and a new male trainer named Cilan. The evil syndicate Team Rocket has a part to play in this season, and Jessie, James, and Meowth have been promoted.

The Japanese opening song is "Best Wishes!" (ベストウイッシュ!, Besuto Uisshu!) by Rika Matsumoto. The first 2 episodes in Japan did not have the ending song, instead, the instrumental songs from Pokémon: Black & White Japanese Anime Sound Collection serve as ending songs during the original broadcast. The ending songs are "Fanfare of the Heart" (心のファンファーレ, Kokoro no Fanfāre) by Aki Okui starting in episode 3 during the original broadcast, and starting in episode 1 on DVD, and "Can You Name All the Pokemon? BW" (ポケモン言えるかな? BW, Pokémon Ierukana? BW) by Takeshi Tsuruno. The English opening song is "Black and White" by Erin Bowman and Joe Philips. Its instrumental version did serve as the end credit song. 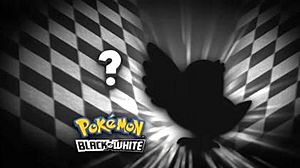 The return of Who's that Pokémon?, an eyecatch that was used during the first six seasons.

To promote the series and the episode where Ash obtains an egg, Pokémon Black and White players were able to obtain an egg containing either an Axew, a Pansage or a Pidove exclusively at US Toys "R" Us stores between April 27, 2011 and May 31, 2011. Each one contained their moves like anime counterparts (Ash's Pidove, Cilan's Pansage and Iris' Axew). Players were only able to get one egg and which of the Pokémon the egg hatched into was random.

Viz Media and Warner Home Video released the entire series in four 2-disc volumes in the United States between 2012 and 2013.