List of tallest buildings in Christchurch facts for kids 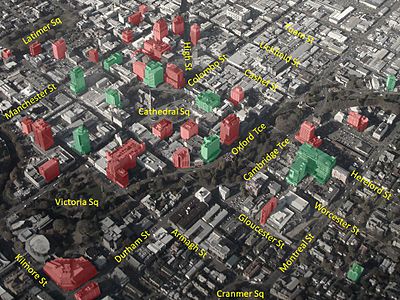 43 of the 51 Christchurch high-rises colour-coded as per the list below, with their status shown as of December 2020

Of the 52 buildings in the list before the earthquakes, 17 are to remain, and 36 have already been demolished.

This lists ranks Christchurch high-rises that stand at least 35 metres (115 ft) tall, based on standard height measurement. This includes spires and architectural details and include antenna masts.

Manchester Courts, earlier known as the MLC Building, was the city's first commercial high-rise building. Built in 1905–1906 for the New Zealand Express Company, it was at the time the tallest commercial building in Christchurch. A Category I heritage building since 1991, it suffered serious structural damage in the 2010 Canterbury earthquake and was condemned to be demolished. Demolition began on 19 October 2010, and was completed in February 2011. 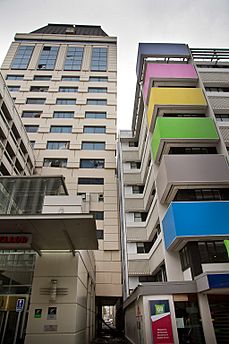 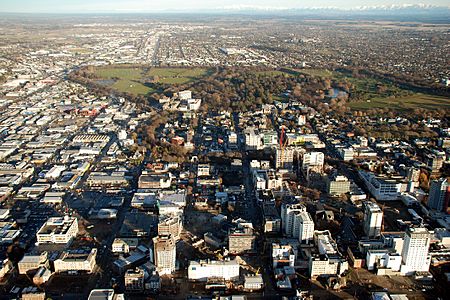 Aerial view of the central city in July 2012 looking west, with most of the earthquake-damaged tall buildings still standing; Manchester Street is at the bottom of the photo

The BNZ Building in Cathedral Square has one of the oldest histories of the buildings listed here, as it replaced the earlier BNZ Building from 1866. The replacement was begun in 1961 as a four-storey building designed by Christchurch architect G. W. Bucknell. Work ceased abruptly in 1963, when the bank announced that they would redevelop the whole site (which included the removal of the historic bank building) and incorporate the four-storey building into the high-rise. The 43 metres (141 ft) high-rise was designed by Sydney firm Stephenson and Turner and completed in 1967.

Since 2007 only three high-rises have been constructed in Christchurch: the HSBC Tower designed by Weirwalker Architecture in Worcester Boulevard, the Novotel Hotel in the Square, and Pacific Tower in Gloucester Street. All three buildings survived the earthquakes. The HSBC Tower, which first opened in 2009, was the first high-rise to open again after the February 2011 earthquake, with the first tenants moving back in on 30 May 2011. The Canterbury Earthquake Recovery Authority later moved into the top floors of the building, with CEO Roger Sutton's office the "highest office in town". Pacific Tower, which houses apartments and the Rendezvous Hotel, was repaired and reopened on 1 May 2013. The Novotel Hotel was repaired and reopened on 19 August 2013.

Radio Network House, a 14-storey building in Worcester Street that was finished in 1986, was imploded on 5 August 2012 and was New Zealand's first ever controlled building demolition by explosives.

The Clarendon Tower was built on the site of the former Clarendon Hotel and kept most of the historic hotel's façade, which was the first example of facadism in Christchurch. Designed by Warren and Mahoney, the high-rise was constructed in 1986/87. The 17-storey structure failed in the February 2011 earthquake, with the internal staircases collapsing and the building 'ballooning' in the middle by some 100 millimetres (3.9 in).

Central city seen from the Port Hills in December 2015 looking north, with most of the earthquake-damaged tall buildings demolished; the Civic Offices in Hereford Street are on the far left

Tallest buildings prior to the February 2011 earthquake

Building remaining after earthquakes      Building demolished since the earthquakes

All content from Kiddle encyclopedia articles (including the article images and facts) can be freely used under Attribution-ShareAlike license, unless stated otherwise. Cite this article:
List of tallest buildings in Christchurch Facts for Kids. Kiddle Encyclopedia.