List of tallest buildings in Columbus, Ohio facts for kids

Skyline of Columbus (Use cursor to identify buildings)

The history of skyscrapers in Columbus began with the completion in 1901 of 16 East Broad Street, which is regarded as the first high-rise in the city. This structure stands 13 stories and 180 feet (55 m) in height. Columbus went through an early high-rise construction boom in the 1920s, during which time the city saw the completion of the 555-foot (169 m) LeVeque Tower, which stood as the tallest structure in Columbus for 46 years. However, the pace of new high-rise construction then remained slow until 1960; starting in that year, Columbus entered into a large building boom that lasted until 1991. During that time, most of the city's tallest skyscrapers were built, including the Rhodes State Office Tower and the William Green Building. Although no Columbus skyscraper ranks among the tallest in the United States, the city is the site of five skyscrapers at least 492 feet (150 m) high. Based on existing and under-construction buildings over 500 feet (152 m) tall, the skyline of Columbus is ranked first in Ohio, fourth in the Midwest (after Chicago, Minneapolis, and Detroit) and 19th in the country. As of September 2020, there are 96 completed high-rises in the city. Columbus ranks third in the state in high-rise count after Cleveland and Cincinnati, which have 163 and 169 completed high-rises respectively.

Columbus saw very little high-rise construction between 1991 and 2010, with the completion of Fifth Third Center in 1998 and only four other skyscrapers ranking in city's 20 tallest buildings being constructed, the tallest of which is the 314-foot (96 m) Miranova Condominiums (2002), and the 20-story The Condominiums at North Bank Park in 2007.

2011 onward has seen significant high rise development in the downtown and close-in neighborhoods, including the 250 High Building, the Hilton Downtown Columbus/Convention Center, the new Columbia Gas Building in the Arena District, and the Le Meridian Hotel at the Joseph in The Short North. As of 2017, there are numerous new high-rise buildings planned and under construction in the downtown area.

This list ranks Columbus buildings that stand at least 180 feet (55 m) tall, based on standard height measurement. This includes spires and architectural details but does not include antenna masts. An equal sign (=) following a rank indicates the same height between two or more buildings. 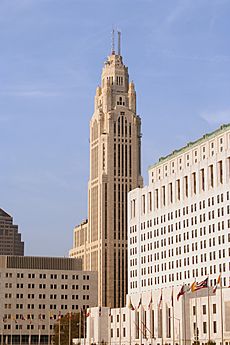 The LeVeque Tower was the tallest building in Columbus from 1927 to 1973.

This lists buildings that once held the title of tallest building in Columbus.

Buildings proposed, under construction, or envisioned

Envisioned and past proposals

All content from Kiddle encyclopedia articles (including the article images and facts) can be freely used under Attribution-ShareAlike license, unless stated otherwise. Cite this article:
List of tallest buildings in Columbus, Ohio Facts for Kids. Kiddle Encyclopedia.