List of tallest buildings in Tulsa, Oklahoma facts for kids 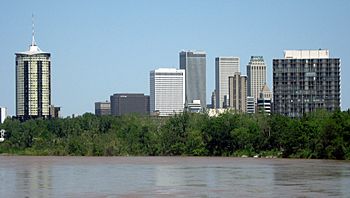 Skyline of Tulsa (Use cursor to identify buildings)

The history of skyscrapers in the city began with the construction of Cosden Building in 1918. This building, rising 16 floors, is often regarded as the first skyscraper in Tulsa. Tulsa's first buildings standing more than 492 feet (150 m) tall were the BOK Tower and the First Place Tower, both completed in 1975. As of November 1, 2019, no buildings are under construction or are planned to rise at least 197 feet (60 m). Overall, the Council on Tall Buildings and Urban Habitat ranks Tulsa's skyline (based on existing and under construction buildings over 492 feet (150 m) tall) 8th in the Southern United States (after Miami, Houston, Dallas, Atlanta, Sunny Isles Beach, Charlotte and Austin), and 22nd in the United States.

Skyline of Tulsa from the University of Tulsa stadium

As of November 1, 2019, there are 29 high-rises in Tulsa that stand at least 200 feet (61 m) tall, based on standard height measurement. This height includes spires and architectural details but does not include antenna masts. 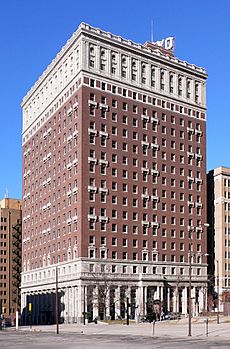 Since 1918, the year the first high-rise in the city was constructed, the title of the tallest building in Tulsa has been held by six high-rises.

All content from Kiddle encyclopedia articles (including the article images and facts) can be freely used under Attribution-ShareAlike license, unless stated otherwise. Cite this article:
List of tallest buildings in Tulsa, Oklahoma Facts for Kids. Kiddle Encyclopedia.