The Little Arkansas River (/ɑːrˈkænzəs/ ar-KAN-zəs) is a river in the central Great Plains of North America. A tributary of the Arkansas River, its entire 123-mile (198 km) length lies within the American state of Kansas. 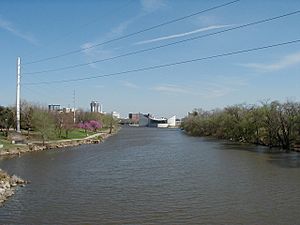 The confluence of the Little Arkansas and Arkansas rivers in Wichita, Kansas.

The river originates in central Kansas in the Smoky Hills region of the Great Plains. Its source lies in extreme south-central Ellsworth County immediately north of Geneseo, Kansas. From there, the river flows generally south-southeast along the border between the Arkansas River Lowlands to the southwest and the McPherson Lowlands to the northeast. It joins the Arkansas River immediately northwest of downtown Wichita, Kansas.

A statue, The Keeper of the Plains by local artist Blackbear Bosin, marks the confluence of these two rivers.

All content from Kiddle encyclopedia articles (including the article images and facts) can be freely used under Attribution-ShareAlike license, unless stated otherwise. Cite this article:
Little Arkansas River Facts for Kids. Kiddle Encyclopedia.