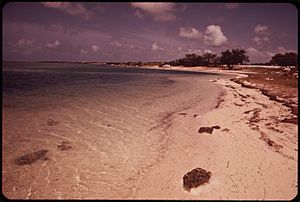 Little Duck Key is a small island in the lower Florida Keys.

U.S. 1 (or the Overseas Highway) crosses the key at approximately mile marker 40, just west of the Seven Mile Bridge. The west end of the bridge terminates on this island.

The island which is marked on current navigation charts as Little Duck Key is part of a very confusing name history of all the islands located on and near the highway between Pigeon Key and Bahia Honda Key. The key was always known locally as Pacet Key and was given the name Little Duck Key during the construction of the Overseas Railroad. It has also been known as Big Money Key. At one point, the island now known as Ohio Key was called Little Duck Key.

The island has a small beach picnic area and boat ramps.

All content from Kiddle encyclopedia articles (including the article images and facts) can be freely used under Attribution-ShareAlike license, unless stated otherwise. Cite this article:
Little Duck Key Facts for Kids. Kiddle Encyclopedia.