Lloyd Milton Brett (February 22, 1856 – September 23, 1927) was a United States Army brigadier general who was a recipient of the Medal of Honor for valor in action on April 1, 1880 at O'Fallon's Creek, Montana. He graduated from West Point and served in numerous campaigns on the Western Frontier and later in World War I. He retired as a brigadier general in 1920. 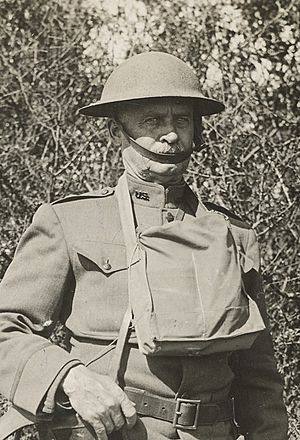 Lloyd Milton Brett as Brigadier General near Stainville 1918, with his M1917 Helmet

After graduation, he received a commission on June 13, 1879 as a Second Lieutenant, in the 2nd United States Cavalry.

While a member of the 2d U.S. Cavalry during the American Indian Wars, he participated in the pursuit of a group of Sioux Indians who had stolen a herd of ponies. On April 1, 1880 the group was located by scouts making camp with the herd at the head of O'Fallon Creek. In what would later be known as the Battle of O'Fallons Creek he was ordered to take ten soldiers and attempt to capture the complete herd. The soldiers were able to retrieve the herd and cut the Indians off from their horses as well. When the Indian group attempted to get to their horses and escape they were driven away, causing them to separate. In the action one of the Indians was killed and five were captured, while the rest escaped into a nearby group of trees. When Brett and his men tried to approach the trees, the Indians, who had lain down on the ground inside the woods, opened fire on the troops. In the battle one soldier was shot in the head and one horse was hurt and the soldiers' attack had been repelled. While the soldiers considered their next move, the Indians moved into a more defensible position, although completely surrounded. By this point it was getting dark and the soldiers were cold and tired from the day's fighting and they determined it unfeasible to attack. At some point the Indian group escaped from their position without a trace and escaped. For his actions during the battle, Brett received the Medal of Honor, which was presented to him February 7, 1895.

He was honorably mustered out of the Volunteers on June 18, 1901 at the rank of lieutenant colonel. In 1903, he was assigned to be the adjutant general of the D.C. Militia and kept that post until 1908. From 1910-1916 he served as acting superintendent of Yellowstone National Park and then in September 1917 he commanded the 160th Infantry Brigade, Camp Lee, Petersburg, Virginia.

In addition to the Medal of Honor he also received the Distinguished Service Medal, Officer of the Legion of Honor, and Croix de Guerre.

All content from Kiddle encyclopedia articles (including the article images and facts) can be freely used under Attribution-ShareAlike license, unless stated otherwise. Cite this article:
Lloyd Milton Brett Facts for Kids. Kiddle Encyclopedia.