Lockwood is a census-designated place (CDP) in Yellowstone County, Montana, United States. Lockwood had the largest growth rate in the state of Montana with 57.8% growth since 2000. The 2010 census put Lockwood’s population at 6,797. Lockwood is a suburb of Billings and is the second largest community in the Billings Metropolitan Area. Annexation of Lockwood to Billings has been studied; however, the June 2009 Billings City Council Annexation Plan states that the city has no plans to annex Lockwood in the foreseeable future. 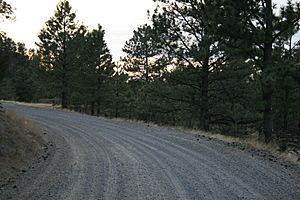 The Emerald hills in Lockwood 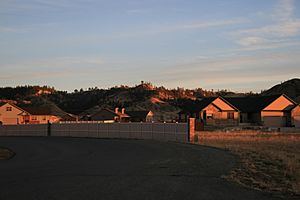 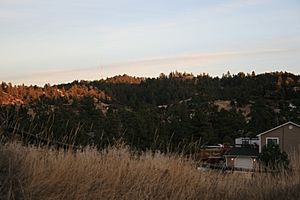 Lockwood viewed from Billings at night

Lockwood bordered Crow “Mitsiadazi” Reservation, in the 1800s. Cows replacing the buffalo brought an end to the plains Indians way of life. Lockwood was named after Captain Lockwood, reputed as a famous Indian fighter and surveyor for the government, camped in the foothills in the late 1800s. In 1907, settlers opened a public road through Lockwood flats of heavy loam to the 2nd crossing of dry creek, to the Dry Creek Road traversing to the Reservation. The old Indian supply road is still etched into the side of the hill at the south end of Exxon Road which was later called Peter Hoe Road.

Lockwood Flats was home of the Johnson Ranch. Just to the southeast of the ranch, one can find reminisces of Cavalry camps as they stay in the area for a whole winter surveying the land for the federal government. The area known as Lockwood flats was also originally the site of a stop called Hirsch, located just between Johnson Lane and old Coulson Road. A community began to develop around it, however, the topographical name Lockwood stuck, and the name Hirsch was eventually forgotten. On June 16, 1965, an F3 tornado touched down near Lockwood. It was the strongest tornado ever recorded in Yellowstone County.

Today, Lockwood has grown to becoming the largest unincorporated community in the State of Montana, and the 16th largest population center in the state. Lockwood is also one of the fastest growing communities in Montana, with an estimated 58% increase between the 2000 and 2010 census. In 2010, Lockwood gained status as a Census Designated Place. Residents and local businesses are working with Yellowstone County and the City of Billings to create a framework for proper infrastructure and zone planning, as well as likely and eventual incorporation as an official municipality.

On October 24, 2013, Lockwood residents gathered for one of the biggest community meetings with 250 attendees to discuss and organize community interest, goals and direction. Pictures of the historic meeting were recorded of the event and posted on the new www.lockwoodmontana.com community website. Groups were organized and champions were chosen for many different issues whether it was for a high school, incorporation, better roads, billings bypass, community garden, community festival, water & sewer, lighting, sidewalks and businesses. A celebration will be held one year from the historic gathering to celebrate the success that has been made.

There were 1,599 households out of which 40.3% had children under the age of 18 living with them, 55.7% were married couples living together, 12.6% had a female householder with no husband present, and 26.3% were non-families. 20.8% of all households were made up of individuals and 5.6% had someone living alone who was 65 years of age or older. The average household size was 2.69 and the average family size was 3.10.

Lockwood’s census data shows that the Lockwood CDP has a population of 8,477 and a 2011 Median Household Income (MHI) of $47,059 compared to the State of Montana’s MHI of $43,872. With this MHI it may make it more difficult to secure grants specific to low income residents.

All content from Kiddle encyclopedia articles (including the article images and facts) can be freely used under Attribution-ShareAlike license, unless stated otherwise. Cite this article:
Lockwood, Montana Facts for Kids. Kiddle Encyclopedia.