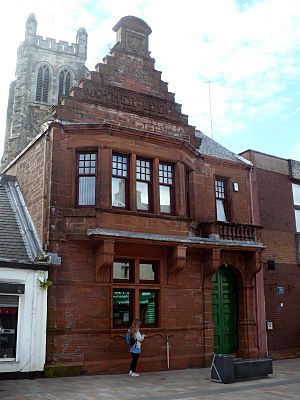 Legend has it that Kilwinning Abbey was built by stonemasons who had travelled from Europe and established a lodge there.. In 1599 William Schaw introduced the Second Schaw Statutes which specified that "ye warden of ye lug of Kilwynning" to "tak tryall of ye airt of memorie and science yrof, of everie fellowe of craft and everie prenteiss according to ayr of yr vocations".

As early as the reign of James II, the lodge at Kilwinning was granting warrants for the formation of lodges elsewhere in Scotland such as, for example, Canongate Kilwinning, Greenock Kilwinning, and Cumberland Kilwinning. In 1736, the Grand Lodge of Scotland was organised and the Kilwinning lodge was one of its constituent lodges. That same year, it petitioned to be recognized as the oldest lodge in Scotland. However, as has happened so many times over Freemasonry's long history, the lodge's original records had been lost and the claim could not be proven. The petition was therefore rejected, wherefore Kilwinning seceded and again acted as a grand lodge, organising lodges in Scotland and on the continent, as well as in Virginia and Ireland. In 1807 Kilwinning "came once more into the bosom of the Grand Loge, bringing with her all of her daughter Lodges."

Tradition demanded that whoever held the Mastery of the Mother Lodge would also be Provincial Grand Master of Ayrshire. As a result, many members transferred from other Lodges to Kilwinning. In 1983 this was changed; Mother Kilwinning was removed from the Province of Ayrshire and became subordinate to the Provincial Grand Lodge of Kilwinning. In consequence, the Lodge sends a representative to the Grand Lodge of Scotland to act as Grand Bible Bearer.

The lodge awards the three degrees of Craft Freemasonry, namely:

In keeping with the traditions of Freemasonry in Scotland, a Craft Lodge may also confer the Order of Mark Masons Degree which, whilst a completion of the Fellow [of] Craft, is conferred after the Master Mason degree.

The Mother Lodge Museum features Masonic artefacts and regalia, including medals, seals, decorative items, photographs and documents. Visits must be arranged ahead, and visitors can also tour the historic Lodge building.

All content from Kiddle encyclopedia articles (including the article images and facts) can be freely used under Attribution-ShareAlike license, unless stated otherwise. Cite this article:
Lodge Mother Kilwinning Facts for Kids. Kiddle Encyclopedia.