Logan Central is a mixed-use suburb and the central business district and administrative centre of the City of Logan, Queensland, Australia. In the 2016 census, Logan Central had a population of 5,945 people.

Once forming part of Woodridge, Logan Central is the official central business district of Logan City and is a major activity centre, with many shops and local businesses operating in the area, mostly along the Wembley Road corridor. Major retailers include Coles, Woolworths and K-mart.

Woodridge railway station is located in Logan Central. It is also well-serviced by a number of bus routes. 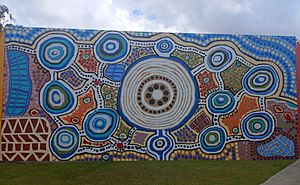 Woodridge Provisional School opened on 20 May 1924 with 21 students and Miss Dorothy Tuke as the first teacher. In 1932 it relocated to the current site and became Woodridge State School.

In 1985 the intention was that Logan Central would consist only of the "Logan City Council Administration Centre and contiguous Council properties", but it was subsequently enlarged with land excised from both Woodridge and Kingston. 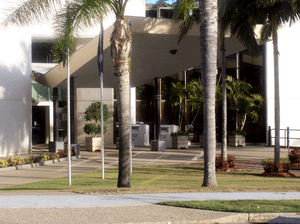 The Logan City Council operate the Logan Central Library at 26 Wilbur Street. The library opened in 2011.

Logan Gardens was built in 1980s and fifteen and a half hectares of land was procured from the Queensland Housing Commission in 1987 for further development of the green area. It has amenities, like car parking, children's playground and pathways. The Garden was utilised for hosting the Olympic Torch Relay's lighting of the cauldron in the year 2000.

All content from Kiddle encyclopedia articles (including the article images and facts) can be freely used under Attribution-ShareAlike license, unless stated otherwise. Cite this article:
Logan Central Facts for Kids. Kiddle Encyclopedia.