Long Island, historically called Inishfada (Irish: Inis Fada, meaning long island), is an island that lies south of Schull, County Cork, Ireland. It has a permanent population of no more than 10. The island is named for being 4.8 km (3.0 mi)long and only 0.8 km (0.5 mi) wide. It is the third largest of Carbery's Hundred Isles at 1.8 km2 (0.7 sq mi), after Sherkin Island and Clear Island. The island’s most distinctive landmark is Copper Point lighthouse at its eastern end, marking the entrance to Schull Harbour. 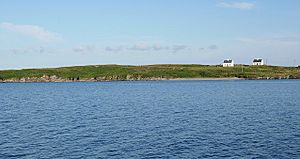 In the 1840s the island had over 300 inhabitants, and the remains of this can be seen by the abandoned cottages and ruins that are left behind.

Long Island has a surfaced road on part of the island, and an overgrown road extends to an old copper mine. Farming is the primary economic activity on the island. There is a regular ferry service from Colla Pier to the island, operating 5 days a week during the summer months and three days a week during the winter months. Long Island is supplied with mains electricity from the mainland through a submarine power cable.

All content from Kiddle encyclopedia articles (including the article images and facts) can be freely used under Attribution-ShareAlike license, unless stated otherwise. Cite this article:
Long Island, County Cork Facts for Kids. Kiddle Encyclopedia.