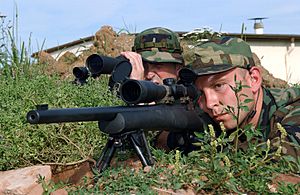 Long range shooting is a relative term generally meaning accurate shooting at distances ordinary shooters with ordinary rifles could not hit. For example, Daniel Boone, using a flintlock rifle could probably hit a target at up to 100 yards (91 m). Today, expert marksmen are hitting targets well over 1 mile (1.6 km) away. Modern long range shooting is more than just using modern machined actions and precision gun barrels. These produce a rifle that a decent shooter can hit targets at about 250 yards, ranges that were unheard of by black powder shooters.

Other factors include "bullet Drift". This means a bullet that fired out of the barrel with a muzzle velocity (speed at the muzzle) of 2800 FPS that exits a barrel with 1:12 rifling is spinning at 168,000 RPMs. At just 1,000 yards (910 m) the bullet will drift about 10 inches (250 mm) in the direction it was spinning. If the rifle has a right-hand twist, the bullet will go to the right of the target.

Long range shooters, and especially snipers, operate as a team. As difficult as long range shooting is, it would be even harder without a spotter. Spotters are also trained snipers or long range shooters. The spotter has a number of jobs. He helps locate the target. He does most of the calculations for elevation, windage, and hitting a moving target. With several targets, the spotter decides which to hit first. Spotters also measure the humidity, temperature, and the angle of the shot. He then tells the sniper/shooter what adjustments to make to the rifle scope. Finally, the spotter tells the shooter where the round hit—on target or a miss—and what adjustments to make to get back on-target.

All content from Kiddle encyclopedia articles (including the article images and facts) can be freely used under Attribution-ShareAlike license, unless stated otherwise. Cite this article:
Long range shooting Facts for Kids. Kiddle Encyclopedia.