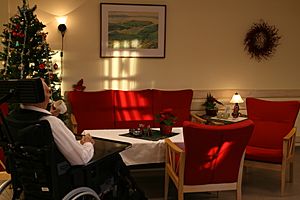 Old man at a nursing home in Norway.

The word longevity means long life, or life expectancy. It often means someone or something lasting longer than expected.

Longevity usually includes thinking about methods to extend life. Longevity has been a topic not only for the scientific community but also for writers of science fiction and utopian novels.

Longevity stories are cultural traditions and lore about exceptional human longevity, with or without eternal youth. These stories include sincere beliefs of claims of extreme age. Each category of belief is based on a different motivation for claiming exceptional age.

Stories of exaggerated longevity have been around since the earliest civilizations. The first longevity narratives were probably the patriarchal/matriarchal claims, which are often an attempt to link humans to the gods or to God due to fuller life. In some religious traditions there are claims that, if one follows a certain philosophy or practice, one can become immortal or at least live to an extreme age.

Fountain of Youth narratives describe some natural source that provides healing and particularly longevity and youthful health. An extension and adaptation of the fountain of youth concept is the idea that a particular place, rather than a substance, carries what is needed to attain extreme age, and that a person seeking extreme longevity needs to move to a special district.

The U.S. Census Bureau predicts that life expectancy in the United States will be in the mid-80s by 2050 (up from 77.85 in 2006) and will top out eventually in the low 90s, barring major scientific advances that can change the rate of human aging itself, as opposed to merely treating the effects of aging as is done today. The Census Bureau also predicted that the United States would have 5.3 million people aged over 100 in 2100. The United Nations has also made projections far out into the future, up to 2300, at which point it projects that life expectancies in most developed countries will be between 100 and 106 years and still rising, though more and more slowly than before. However, the UN has warned that these projections are uncertain, and caution that any change or advancement in medical technology could invalidate their projections.

All content from Kiddle encyclopedia articles (including the article images and facts) can be freely used under Attribution-ShareAlike license, unless stated otherwise. Cite this article:
Longevity Facts for Kids. Kiddle Encyclopedia.