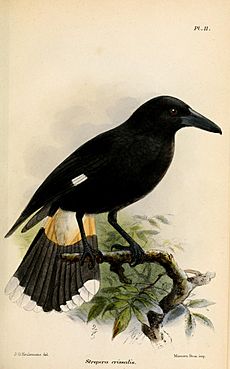 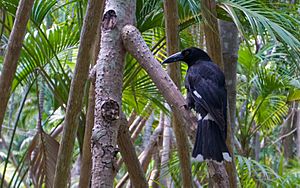 The currawong is restricted to the Lord Howe Island group where it inhabits the main island's native subtropical rainforest and palm forest, especially along creeks and in gullies, as well as areas around human habitation.

The Lord Howe currawong has a strong sense of curiosity, often following walkers on the island's tracks. They are aggressive during the breeding season and will swoop at walkers who approach their nests.

The currawong is a predator and an omnivore. The birds forage widely throughout the island and offshore seabird colonies. They take small birds and the young of many birds, including domestic poultry, as well as seeds and fruits.

The currawong breeds in territories in the forest that contain a section of gully or watercourse lined with tall timber. It has been estimated that the island is large enough to contain 35-40 territories. The bird builds a cup-shaped nest of sticks and twigs, lined with finer twigs, in the outer branches of a tree, in which it lays a clutch of three light brown eggs, marked with darker blotches. The incubation period is 21 days and the time from hatching to fledging about 30.

The currawong has a distinct loud and melodious call.

In 2000 the population was estimated to comprise about 80 mature breeding birds. The taxon is listed as Vulnerable under Australia's EPBC Act because of its small and restricted population and occasional persecution due to its predatory habits.

All content from Kiddle encyclopedia articles (including the article images and facts) can be freely used under Attribution-ShareAlike license, unless stated otherwise. Cite this article:
Lord Howe currawong Facts for Kids. Kiddle Encyclopedia.