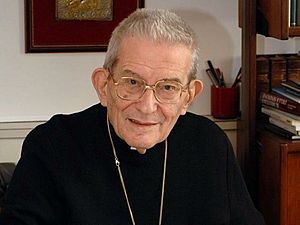 Loris Francesco Capovilla (14 October 1915 – 26 May 2016) was an Italian Roman Catholic prelate. At the age of 100, he was one of the oldest Roman Catholic bishops. Since his elevation in February 2014 until his death in May 2016, he was the oldest member of the College of Cardinals.

All content from Kiddle encyclopedia articles (including the article images and facts) can be freely used under Attribution-ShareAlike license, unless stated otherwise. Cite this article:
Loris Francesco Capovilla Facts for Kids. Kiddle Encyclopedia.