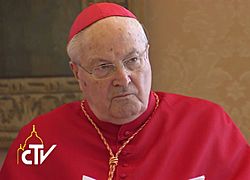 Angelo Raffaele Sodano (born 23 November 1927) is an Italian Cardinal of the Roman Catholic Church. He was Dean of the College of Cardinals from 2005 to 2019. He was born in Isola d'Asti, Piedmont.

On 22 June 2006, Benedict XVI accepted Sodano's resignation as Secretary of State on 15 September 2006. He was replaced by Tarcisio Bertone, then Archbishop of Genoa.

On 21 December 2019, the Legion of Christ discovered that Sodano was the one who led efforts to cover up the reports of abuse when he was serving as Secretariat of State. Sodano was accused of seeking a deal to bury documents detailing abuse. The same day, Pope Francis accepted Sodano's resignation as Dean of the College of Cardinals.

All content from Kiddle encyclopedia articles (including the article images and facts) can be freely used under Attribution-ShareAlike license, unless stated otherwise. Cite this article:
Angelo Sodano Facts for Kids. Kiddle Encyclopedia.