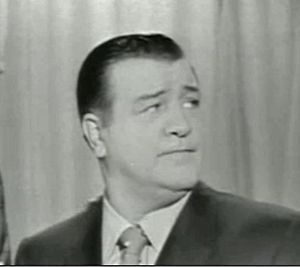 Lou Costello being surprised on This Is Your Life.

Lou Costello, born Louis Francis Cristillo (March 6, 1906 - March 3, 1959), was an American actor and comedian best known as half of the comedy team of Abbott and Costello, with Bud Abbott.

All content from Kiddle encyclopedia articles (including the article images and facts) can be freely used under Attribution-ShareAlike license, unless stated otherwise. Cite this article:
Lou Costello Facts for Kids. Kiddle Encyclopedia.